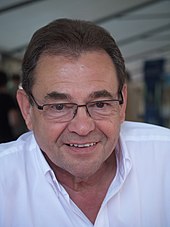 At the age of 17 he began his studies at the art academy. He was heavily influenced by Maurice Tillieux .

Together with Turk , Bob de Groot worked on several comic series, which are pure funny series in the style of André Franquin ( Gaston , Spirou and Fantasio ) , Morris ( Lucky Luke ) or Raoul Cauvin / Willy Lambil ( The Blue Boys ). Bob de Groot was responsible for the text and the scenario , while Turk was responsible for the drawings. Robin Ausdemwald ( Robin Dubois , from 1969) describes the adventures of Robin Hood with the sheriff in Sherwood Forest .

Leonardo (Léonard, from 1975) is based on Leonardo da Vinci . His assistant here regularly has to suffer from the crazy inventions. Interesting are the often occurring side stories between mouse and cat, which illuminate the story from their point of view.

Percy Pickwick ( Clifton , from 1971) took over both from Macherot. The comic is about a British secret agent from MI5 . Percy Pickwick is anold school gentleman with a red MG TD , umbrella, cat and housekeeper .