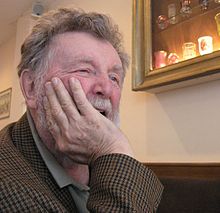 Boris Čelovský , actually Bořivoj Čelovský (born September 8, 1923 in Ostrava - Heřmanice ; † February 12, 2008 ibid) was a Czech historian and philosopher . Most of his works dealt with Czech-German relations.

After the communist seizure of power in Czechoslovakia in 1948 , Čelovský studied at the University of Heidelberg , then emigrated to Canada , changed his name to Boris Celovsky and continued his studies in modern history at the Université de Montréal . He wrote his dissertation on the Munich Agreement in 1938. After he finally settled in Canada, he worked at the government's statistical office. At the same time he was working for the government counterintelligence to monitor Czechoslovak spies. He later became an advisor to various Canadian politicians and drafted the most liberal Canadian immigration law of the time. After the Velvet Revolution he went back to his hometown Ostrava and published several of his works there in the Czech language.

Čelovský died in his apartment after a serious illness. A street was named after him in his honor.