Buddhist councils serve to advise and clarify the authentic teachings of the Buddha (563–483 or 448–368 BC) or their verbatim transmission and the formulation in canonical form.

The resulting Buddhist canon forms the basis of the teaching. Already with the second council the division into Hinayana and Mahayana schools arose . As a rule, the conservatives were more strongly represented at the councils, from the third they mainly served to establish the Pali canon .

After the first four councils, which were held about three to five generations apart, there was a long interruption. It was only in the modern era that the conciliar tradition of the early Buddhist period was followed up by a fifth council.

During the Buddha's lifetime it was unusual in India to put religious texts into writing. Instead, they were passed down orally through memorization , repetition and recitation.

Immediate canonization was deemed necessary after the Buddha's death. For this purpose (according to the Pali Canon , Cullavagga XI (Vinaya Piṭaka) and DN 16) 500 experienced monks (an iconographical number) met shortly after the death of the Buddha. At the following councils, new developments in the Buddhist community were discussed and the canonical texts were defined. Heterogeneous currents developed, which developed into their own schools, and which convened their own councils, often of regional importance.

For the great vehicle ( Mahayana ), neither the canonized three-basket nor the councils are of such great importance. Although the Mahāyana also has a rich canonical literature , no Mahāyana council is known, and the diversity in the Mahāyana is accordingly. As far as individual schools of Mahāyana have a central leadership, such as Gelugpa , Jōdo-Shinshū and Sōtō-shū , there are approaches of binding guidelines and synodal consultations.

For reciting certain texts, there were specialists, so-called "bhāṇaka". Because Ānanda (the personal attendant and faithful follower of the Blessed One) was asked about the discourses at the First Council and recited them, the introduction to most of the sūtras (discourses) reads: "So I heard" (pāli: "evaṃ me sutaṃ" ). 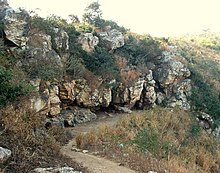 According to tradition, the first Buddhist council ("the five hundred") was called immediately after the enlightened had died out (483 BCE). It was agreed that the coming rainy season (from June) would be the right time and the area in front of the Sattapaṇṇi caves ("seven-leaf caves", named after the fragrant seven-leaf tree) on the north slope of Vaibhāra mountain near Rājagriha ( Rājagṛha , Pāli: Rājagaha ), where Ajātasattu, the Grand Duke of Magadha, had a pavilion-like roof built.

The tradition (Cullavagga XI of the Vinaya-Piṭaka in the Pāli Canon) reports that the "basket of discourses" (pāli: "Sutta-Piṭaka", i.e. the doctrine of " dharma ") and the "basket of religious rules" ( pāli: " vinaya -Piṭaka", i.e. the discipline of the monks and nuns). The Buddha's long-time confidante, Ānanda , who was known for his excellent memory, is said to have reproduced the discourses (sutta) and Upāli , who was known for his excellent knowledge of the rules, the vinaya (the rules of the order). The Abhidharma (the "higher teaching", the scholastic system of teaching) did not yet exist at that time.

See Buddhaghosa's commentary "Vinaya Nidāna" for more details. Another text that reports on it is called "Kāśyapasaṃgīti-sūtra" and is preserved in the Chinese canon (Taishō No. 2027).

The second council took place about 110 years after the extinction of the Buddha, i.e. around 383 BC. u. Z., in Vaiśālī (pali: Vesālī ) instead. An editor, at least for the Vinaya , has been secured for this . The main purpose of the gathering, however, was to bring the "heretics" of the Mahāsanghika to reason, which was not achieved when they refused to accept the restrictions of the "ancients" ( Stahvira ). For example, there was a dispute as to whether a monk should have salt (no: as food, yes: as medicine) overnight.

The first split in the Sangha occurs, the Mahasanghika school separates from the traditionalists. It is about the question of the Mahasanghikas whether the sutras and the vinaya have already been determined as final. This split marks the first beginnings of Mahayana Buddhism.

A third council, under the direction of the monk Moggaliputta Tissa, in which only the "ancients" (= Theravadins) participated, took place during the rule and at the instigation of the emperor Aśoka (uncertain: around 268 - uncertain: 232 BC) in Pātaliputra ( today: Patna ) took place, on which last additions to the Pali canon (especially Abidhamma ) were made. The main purpose, however, was to "purge" the Sangha. In the Vasumitra manuscript there is a description of five heretical points that should be clarified. The Sarvastivadin and Vibhajjavadin schools arise .

It is not historically certain whether there was one or more “third parties”. In particular, the Theravada Dipavamsa describes a different course.

Soon afterwards, the emperor's son, Mahinda , is said to have brought Buddhism to Ceylon , where the Pali canon was finally recorded under King Vaṭṭagāmaṇī Abhaya (ruled from 89 to 77 BC) .

Sri Lanka around 30 BC Chr .: A council is said to have taken place in Tambapanni , today's Aluvihara near Matale , the purpose of which was to lay down the canon, since not all monks had a sufficiently good memory to keep the whole text.

Kashmir 1. century: Usually, however, is considered outside the Theravada the first or second century on excitation of the KuSan -Herrschers Kaniška held Council of Sarvastivada , either in Jalandhara ( Punjab ) or Kuṇḍvana ( cashmere took place), as the fourth. 500 monks under the direction of Vasumitra are said to have participated . The Mahā-Vibhāshā ("great exegesis") commentary is considered to be the main result .

At that time there were already 18 schools of Buddhism. The leaders at the council were the Sarvāstivādins . The wording of the texts was determined and carved on copper plates, which in turn were kept in a reliquary. The plates and shrine have not been rediscovered to this day.

The council of 1788 met at Wat Mahathat, Bangkok

King Phra Phutthayotfa Chulalok (Rama I) of Siam convened his own council in 1788 at Wat Phra Si Sanphet (today's Wat Mahathat ) with the declared aim of revising the Pali texts. Based on this, under the suggestion of Chulalongkorn (Rama V.) 1893-1894, the first complete print edition in Siamese script in 39 volumes appeared in Bangkok, which in turn served as a template for Neumann's German translation.

There were other smaller councils, especially in Thailand and Burma, but they were only of local importance, more like synods.

This took place in 1868–1871 under King Mindon Min in Mandalay . Under the direction of Mahathera Jagarabhivamsa , the Ew. Narindabhidhaja , and the Ew. Mahathera Sumangalasami recited the Tipitaka to 2,400 monks and nuns for five months in order to arrive at a corrected text.

The established canon was carved on 729 marble tablets in the Kuthodaw Pagoda in Mandalay.

Martin Steinke (German delegate), Kushok Bakula Rinpoche, Friedrich Voldemar Lustig and Karl Tõnisson (née Este, Lat. Kārlis Tennison, Russian Карл Тыниссон, religious name: Vahindra). The latter two had lived in a Burmese monastery since 1949 and were the Latvian delegation to the Congress of the World Buddhist Federation, which took place parallel to the opening of the 6th Buddhist Council.

Held in 1954–1956 for the 2500th anniversary of the extinction, in Kaba Aye Rangun , Burma, the last time a binding Theravada version of the Pali canon was laid down, the Chaṭṭhasaṇgīti Pi legteakaṃ. The cave of the first council was modeled as a meeting hall. Monks from all Theravada countries took part. The German monks Nyanatiloka and Nyanaponika also took part. Since 2000, a dispute emanating from Thailand over the content of the established canon has broken out.