Cake Design , also cake design , cake art and design or design of Motivtorten called designated, the embossed of America and Britain art, pies , cakes and muffins to decorate artistically or to give them a special form. Often a cake is designed for a certain occasion, place or a certain celebration or event. Such occasions are, for example, weddings, christenings, birthdays, degrees or company events. The respective cakes are specially shaped and modeled and decorated with an edible decoration made of rolled fondant , marzipan , buttercream , gum paste , chocolate, modeling chocolate or frosting , which is called royal icing . Edible decorations made of gum paste and wafer paper , a special type of edible paper , from which, among other things, flowers can be modeled, are now also common . There are now also competitions for cake design.

Cake Design originally comes from France . A recipe for rolled fondant was first mentioned in the Traité des Fardements et Confitures factory by Nostradamus in 1555. The term rolled fondant was later adopted with the British name rolled fondant . Marzipan was invented as early as 1494, but was not used until the 17th century in the form of marzipan blankets for cakes and decorations. In parallel with the French development, decorated cakes appeared in Great Britain as design elements for banquets and receptions for the first time during the reign of Elizabeth I.

At that time rolled fondant was a mixture of sugar, tragacanth and water. It was already used in the Middle Ages to make life-size edible decorations. At the time, sugar was a luxury item that the wealthy and nobles liked to use to display their power and wealth.

In the 16th and 17th centuries, gumpaste was valued primarily for its elastic properties and the porcelain-like texture after it had hardened in the air. The rolled fondant was shaped into dishes and cups similar to later porcelain and then dried, but was thinner, more delicate and whiter than the porcelain available at the time. Confectioners also used it to make decorations in the form of fruits, but also birds and other animals for the tables at court parties.

From the mid-17th century, French pastry chefs were creating gigantic cakes with excessive sugar decorations in the form of flowers, sculptures, and more. These cakes were primarily used as decorations on the banquet tables of wealthy aristocrats . As before, they were an expression of power and wealth and testified to an impressive lifestyle. Some of these cakes were of such gigantic proportions that the owner of the house first had to have the doors removed so that they could be brought into the ballroom. However, the decadent height of the cakes was often the cause of the collapse and collapse of the works of art.

Even if the first icing wedding cakes were made in the 17th century, it was the three-tier wedding cake of Queen Victoria and Albert of Saxe-Coburg and Gotha in 1840 that set standards and shapes the design of wedding cakes to this day. It is also thanks to Queen Victoria that from then on one spoke of royal icing instead of frosting. In The Times , the lavish decoration was described down to the last detail: “On the second level, which was supported by two pedestals, was a sculpture of Britannia , who looked at the royal couple and watched them exchange their vows while watching at their feet sat a dog, symbolizing loyalty, and two lovebirds, symbolizing purity and innocence. All over the cake, angels and Cupid were also sitting , including an angel who kept the happy date of the wedding on a sign for eternity. "

When Prince Edward Leopold married in 1882, all three floors were made of cake. One of the finest cakes of the Victorian Age was the wedding cake of Princess Louise , Queen Victoria's daughter, in 1871. This cake was over five feet high and weighed 100 kilograms.

In the same year the thermostat stove was invented. This made baking cakes and pies easier and more popular. In 1888 the recipe for gumpaste as we know it today was finally developed. In France, however, this type of cake design with gumpaste disappeared in favor of extensive decorations made of marzipan, royal icing and sugar in the 19th century. 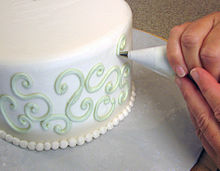 Presumably based on an accident, the method of garnishing cakes with the help of piping bags and piping tips arose in Bordeaux in the mid-19th century . A French pastry chef at Aubriot & Trottier  accidentally cut off the corner of a paper bag filled with meringue and used it to write his name on the work surface. Since then, piping bags have been filled with royal icing, buttercream or even chocolate to decorate cakes.

A French confectioner who was famous at the time developed the technique further and invented today's stringwork , a special form of free-hanging ribbons and cords made of royal icing, as well as the decorations with the appearance of lace . The edible decorations were made separately and subsequently attached to cakes or pies.

In 1982, commercial, completely ready-made and cured sugar decorations came on the market to easily decorate cakes.

In the first half of the 20th century, the art of cake decoration was perfected in England and English-speaking countries. It was not until 2000 that the art of cake design was rediscovered as a hobby and has since enjoyed great popularity in Europe. In the meantime, cakes with or with fondant are also referred to as motif cakes, and cake design has developed many subspecies. A distinction is made between cake painting, 3D cakes, sugar blossoms and very modern cakes with wafer paper .