Cederick Alexander Johnson (born August 16, 1989 in Charlotte , North Carolina , USA ), better known by his ring name Cedric Alexander , is an American wrestler who was under contract with World Wrestling Entertainment and regularly appears on their weekly show Raw .

His greatest achievement to date has been receiving the WWE Cruiserweight Championship and the WWE 24/7 Championship .

In 2010 Johnson played many dark matches in the Wrestling League Ring of Honor , where he was later signed and given the ring name Cedric Alexander . There he formed the Tag Team C&C Wrestle Factory with Caprice Coleman from 2011 to 2013 . After the tag team was broken up, Johnson appeared as a single wrestler. On May 14, 2016, Johnson announced his departure from the Ring of Honor.

Johnson took part in the Cruiserweight Classic hosted by World Wrestling Entertainment , where he made it to the round of 16 and was defeated by Kota Ibushi.

After the tournament, he signed a contract with the WWE, where he became part of the re-established Cruiserweight division. There he was allowed to keep his ring name. He made his debut match for WWE on September 19 on Raw , where he was defeated by The Brian Kendrick in a fatal four-way match that also included Rich Swann and Gran Metalik . With the introduction of WWE 205 Live , he, like all other wrestlers in the Cruiserweight Division, became part of WWE 205 Live. There he was initially put as a valet by Alicia Fox , who, according to the storyline, was his girlfriend. 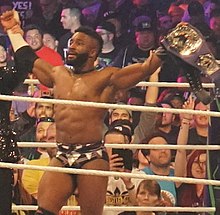