This article covers the downtown area. For the roller coaster of the same name, see Canobie Corkscrew .

The Loop with skyscraper seen from the John Hancock Center : on the left the Aon Center with on the right the Two Prudential Plaza , on the right behind the Willis Tower 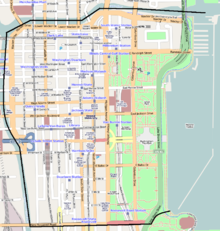 With The Loop residents call the Downtown -Bezirk Chicago . It is the second largest business district in the United States after Midtown Manhattan . It borders the Chicago River to the west, Lake Michigan to the east and Roosevelt Road to the south.

The term loop means something like loop in German, but in the case of Chicago does not come from the elevated railway, as is often claimed, but from a tram designed as a funicular that drove around the square before 1900 . The construction was similar to that of the cable cars in San Francisco .

Ever taller buildings have been erected in the Chicago Loop since the late 19th century. The Home Insurance Building is considered to be one of the first skyscrapers . The Willis Tower (formerly Sears Tower) was the tallest building in the United States from 1974 to 2013 and is still the tallest in the city. In the loop is the historic twelve-story building of the Marshall Field & Company Store (architect Daniel Burnham ), which has been on the National Register of Historic Places since June 2, 1978 .

The Loop also specifically describes the smaller part of the district, the Chicago Community Area 32, which is enclosed by the elevated circuit of the Chicago "EL" . The route runs along Lake Street to the north, Wabash Avenue to the east, Van Buren Street to the south and Wells Street to the west.

16,388 people live in the loop, according to the 2000 census . It also includes an outdoor sculpture by Pablo Picasso , just like the Chicago Art Institute .

On April 13, 1992, water seeped into the basement floors of several high-rise buildings in the Loop, which paralyzed business life for a few days because the transformer stations installed in the basement were switched off out of caution. It was found that water from the Chicago River had seeped into the Chicago Tunnel Company's abandoned tunnel system and was dispersed through the tunnels downtown. After 3 days, and later in some buildings, regular operations could be resumed. The leak was about 1 million m 3 estimated water, the damage amounted to 1.95 billion USD.