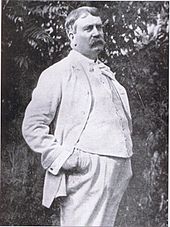 Daniel Hudson Burnham (born September 4, 1846 in Henderson , New York , † June 1, 1912 in Heidelberg ) was an American architect and urban planner . He made a name for himself as a designer for the design of Chicago , as the chief architect of the World's Fair of 1893, and as the architect of one of New York's most remarkable skyscrapers , the 91-meter-high Flatiron Building .

When Burnham was nine years old, the family moved to Chicago. As a young high school graduate, he failed multiple entrance exams for Harvard and Yale universities . He initially worked in the Nevada mines , but returned to Chicago in 1868.

He worked for a year as a draftsman in the office of Loring & Jenney , for the architect William Le Baron Jenney , known as the father of the skyscraper , and built some small houses for his own account. Before the great fire of 1871, he partnered with Gustave Laureau. The fire destroyed their economic existence and Laureau left the city. Burnham's father brought structure back into his life and got him a job as a draftsman at the architecture firm Carter, Drake & Wight , where he met John Wellborn Root , who had followed Peter B. Wight from New York to Chicago. Peter B. Wight was an important exponent of the Gothic Revival , and Burnham admired him greatly. This took him under his wing. Root had studied engineering and trained as an architect. In 1873 the two entered into a partnership and set up as architects under Burnham & Root . The partnership resulted in a fruitful symbiosis : Root possessed the creative and artistic talent, while Burnham was an excellent salesman and organizer. When they started they only had one draftsman. The second they hired was William Holabird and the third was Clinton J. Warren . Burnham designed little, but mastered the technical, functional and financial side of building. He saw it as his task to ensure that a building was built economically and still could fulfill its intended function. With his persuasive manner he was a first class salesman.

After the great Chicago fire, Burnham and Root took on the great task of rebuilding the city from scratch in 1873. Her office designed more than 165 private houses and 75 public and private buildings. Burnham was often accused of being “only” the politician of the partners, while Root was the “real” architect. Where John Root was the tactician able to translate plans and programs into practical architecture, Burnham was the best at strategic thinking. Burnham solved every problem with the same organizational skills that brought their business to the fore among architects. Burnham & Root became the hip address for business people in Chicago, whose offices on the Loop and their private homes in the suburbs they built.

In 1873 Burnham met his daughter Margaret while building a house on Prairie Avenue for John B. Sherman, president of the Chicago Union Stockyards , and married her shortly thereafter. Through her father, he got access to the circles of the better society and access to the important building contracts of the city.

Burnham and Root became pioneers of commercial architecture in Chicago and protagonists of the so-called Chicago School , which produced cautiously designed buildings in skeleton construction. Outstanding examples of buildings designed by Burnham and Root are the Rookery Building (1887), the first high-rise in lightweight construction, and the Masonic Temple Building (1891-1892).

For the " World's Columbian Exposition " - the Chicago World's Fair in 1893 - Daniel Burnham was appointed chief architect. While Dwight Perkins worked with Root on the planning of the World's Fair, Dwight Perkins took care of the office. His partner John Root became an architectural consultant, but died unexpectedly in January 1891 of pneumonia. After Roots' sudden death, Burnham found a good successor in the New York architect Charles Bowler Atwood . White City was built for the world exhibition , a district whose architecture is shaped by historicism . The facades were decorated with stucco. Many architects of his time were disappointed and described this as an architectural step backwards. The exhibition had introduced the ostentatious Beaux Arts style in the United States , with a mixture of columns, domes, arches and vistas . Bankers and entrepreneurs wanted this prestigious design for their new buildings, and the office, renamed DH Burnham & Company , met this need with great success.

For his many years of excellent work at the 1893 World's Fair, he received honorary doctorates from Harvard and Yale Universities.

Despite all the criticism of his architecture, Daniel Burnham became President of the American Institute of Architects in 1894 . His office D. H. Burnham & Co. employed a number of architects who later became famous.

In 1906 he was elected to the American Academy of Arts and Letters .

From the beginning of the 20th century until his death, Daniel Burnham excelled primarily as an urban planner. In 1909 he submitted a general urban planning draft for Chicago ("Plan of Chicago"), which, among other things, defines the bank front on Lake Michigan as a free landscape zone with beaches, lagoons, islands and marinas. Burnham ignored all practical aspects of the planning and focused on the visible features. Around 300 million US dollars were put into the planning. This urban development plan was designed for 30 years and served as the basis for urban planning in Chicago for a long time. Other cities he was involved in planning include Baltimore , Buffalo , Cleveland , Washington, DC, and San Francisco .

In the 1900s, Burnham was hired by the US Philippine Commission to design development plans for the cities of Baguio and Manila .

A well-known quote from Daniel Burnham goes: “Don't make small plans. They don't have the magic to get people's blood pumping. They are not realized. Make big plans, set yourself the highest hopes - and work. "

Burnham visited Germany to study the round arch style .

In 1876 Burnham married Margaret Sherman. Their marriage resulted in three sons and two daughters. Two of the sons, Hubert and Daniel Jr., also became architects, and Burnham sent them to Paris to study at the École des Beaux-Arts . They later became famous for the Art Deco- style Carbide and Carbon Building on Michigan Avenue. They gave their father's original drawings to the Art Institute of Chicago , which eventually became the Burnham and Ryerson Library , which became one of the most extensive collections of architecture in the world.

After the death of Daniel Burnham in 1912, the office was renamed Graham, Burnham & Co. , which with partners Ernest R. Graham, Pierce Anderson, Edward Probst, Howard J. White, Daniel H. Burnham Jr. and Hubert Burnham until 1917 duration. Then the brothers founded the Burnham Brothers office , and their previous partners have operated under the name Graham, Anderson, Probst & White since then .