The Chin State ( Burmese ချင်းပြည်နယ် , BGN / PCGN : chinbyinè) is one of 15 administrative units in Myanmar . 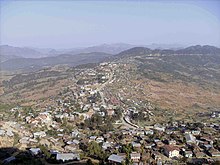 Chin State is located in western Myanmar. It borders the Sagaing region and the Magwe region in the east and the Rakhine state in the south . In the west it forms part of the state border with India and Bangladesh . The Chin State covers an area of ​​36,018.9 km². The capital is the 1867 meter high Hakha , the city had around 20,000 inhabitants in 2005.

The Chin State is divided into three districts: Haka , Falam and Mindat .