This article is about the Congregation of Christian Brothers . She is not identical with the brothers in the Christian schools . 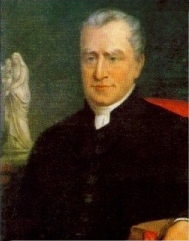 At the end of the 18th century, Edmund Rice decided to go to Rome to join the Augustinians . However, he changed his mind, returned to Ireland and decided, with the help of the Bishop of Waterford , to found his own religious community. Like Nano Nagle , he wanted to focus his work on teaching disadvantaged young people and opened the first two schools in Waterford in 1802. Other employees joined the idea and decided to live in a lay community . For this purpose, with financial support from the Diocese of Waterford, a community house and a larger school was built, which was opened on June 7, 1803 by Bishop Hussey (1797-1803). On August 15, 1808, Edmund Rice and six other brothers made their vows before the diocesan bishop and initially called themselves " Presentations Brothers ". Thus this community was the first lay male congregation established in Ireland. Additional facilities were established in Dungarvan in 1811 , in Cork and Dublin in 1812 and in Limerick in 1816 . In 1820 the "Congregatio Fratrum Christianorum" received papal approbation and developed rapidly beyond Ireland. Her motto, which is also shown in her coat of arms, is: Facere er docere (English: education and teaching). The brotherhood expanded via Liverpool , then to Australia , New Zealand and India , in 1900 they set up a house in Rome , in 1906 they founded a school in New York City and in 1955 they founded a college in Uruguay . But the brothers were not always successful; they failed in Gibraltar and Sydney . In Ireland the Christian Brothers pursued a very national-conservative course, in their schools teaching was in Irish and in sport national sports were preferred.

The Christian Brothers are divided into several religious provinces, each province is led by a leadership group, the General House is in Rome and is occupied by a leadership team that is elected every six years. It works according to the rules of the order and has carried out a reorganization in recent years. The previous three provinces in America were merged in 2005 to "Edmund Rice Christian Brothers North America". The five provinces in Oceania were merged into "Oceania province" in 2007 and the previous European provinces were transformed into "European province".

The Order in Ireland has become known there and around the world recently in connection with the Irish abuse scandal involving the systematic abuse and abuse of thousands of children in homes . The Irish Government's 1999 Child Abuse Investigation Board found the abuse endemic in its 2009 final report, accusing both the Irish State of failing to oversee the home children and the Catholic Church. The Christian Brothers and the Sisters of Mercy are named as the main culprits , as their widespread institutions describe the abuse as systematic. Former Irish Prime Minister Bertie Ahern and Cardinal Seán Brady , Primate of Ireland and Archbishop of Armagh, both publicly apologized several times for decades of u. a. sexual abuse.

In Germany the scandal was u. a. known from the film The Merciless Sisters , which received various awards. He described the abuses in the applicable Magdalene homes ( Magdalene Laundries ( "Magdalene laundries")).

Gabriel Byrne attended a seminary with the Christian Brothers in England for four and a half years . Byrne revealed in January 2010 on Irish television show "The Meaning of Life" that he had been a victim of sexual harassment in the seminary. Before that he had toyed with the idea of ​​becoming a priest himself, but through this experience he refrained from doing so.

Between 1950 and 2010, abuse allegations were made against seven percent of Australian Catholic priests. A total of 1880 alleged perpetrators were accused, in the order of the Christian Brothers the proportion of suspects was 22 percent.