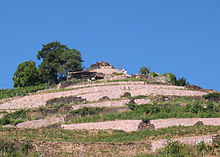 Cikkurat with the entrance to the interior

Cikkurat: Close-up view of the upper two turns, from the mountain side

Possibly piled up in the early 17th century, documented on a view from 1842, this mountain observatory, made of syenite rock in the form of a snail about seven meters high , is located on the slope edge above Haus Hermannsberg . On the outside of the snail there is a spiral path to the viewing platform on its top.

The outline and name of the cultural monument should be reminiscent of the Mesopotamian step pyramids ziggurat . There was also a mountain of snails in the landscape garden in Machern .

There is a small vaulted cellar at the foot of the Cikkurat on the valley side . It was used to watch the thieves, birds and fire; in the interior there was previously a fireplace for heating, the outlet of which still extends up to the top.

Since 2016 there has been a ceramic snail head, the "snail", on top of the stone snail . The work of art was created by the ceramist Detlef Reinemer for the local art historian Rainer Beck . It was placed on the top so that the body sits over the smoke opening; If a smoking fire is lit in the lower room, the snail will smoke through openings in its mouth, nose and ears. In the years since he has been co-owner of the winery, Beck has placed some works of art in the vineyard that visitors can view on the open winery day.