This article is about the British inventor and entrepreneur. For the British author of the same name, see Clive Sinclair (Author) .

Sir Clive Marles Sinclair (born July 30, 1940 near Richmond , United Kingdom ) is a British inventor and entrepreneur . He became internationally known in the 1980s for the Sinclair ZX81 and ZX Spectrum home computers he developed . In Great Britain he had already made a name for himself with pocket calculators . He is also known there as the designer of the C5 electric vehicle .

Sinclair, whose father and grandfather were already engineers, tinkered around early on and built radios or repaired amplifiers. When he developed a calculating machine powered by punched cards, he initially believed he was the inventor. Sinclair never went to college; shortly before graduating from high school in 1958, he developed a miniature radio that he wanted to sell by mail order. First, however, he worked as an author for the technical publishing house Bernard Babani and published between January 1959 and May 1962 a total of 13 books for hobby electronics . His Practical Stereo Handbook: The Complete Guide to Stereo (June 1959) had seven editions by 1973.

In 1961, Sinclair founded his first company, Sinclair Radionics , which initially produced hi-fi equipment (until 1974). Sinclair also worked as an author between 1962 and 1969.

In 1972, Sinclair Radionics launched the Executive pocket calculator , which was significantly smaller than the competition thanks to energy-saving technology that enabled the use of hearing aid batteries. The pocket calculator was clear evidence of Clive Sinclair's interest in miniaturization, which would be reflected again and again in later products. In 1974 the digital multimeter DM1 appeared; Measuring instruments of this type formed a stable source of income for the company in the years that followed, funding more spectacular but commercially less successful projects. One such was the Black Watch presented in 1975 , one of the first digital watches. Like other Sinclair products, it was also available as a kit at a lower price. The futuristic designed watch had numerous technical defects and turned out to be a flop that almost meant the ruin of Sinclair Radionics. To rescue the company, the state National Enterprise Board (NEB) initially bought 43% of the shares in 1976. This enabled Sinclair to complete a project he had been working on for ten years - the Microvision TV1A pocket television, which launched in 1977. 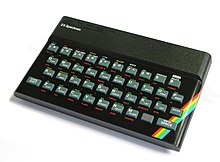 The first computer that Sinclair constructed was the MK 14 (kit) in 1977 . This was followed by the Grundy NewBrain , ZX80 , ZX81 . He developed the ZX Spectrum in 1982 after losing to the much more expensive but also more universal competing product from Acorn , the BBC Micro , in the tender for school television by the British broadcaster BBC . However, the ZX Spectrum evolved into the more commercially successful product. The Sinclair QL followed in 1984, but it was unable to build on the success of its predecessor. In 1986 he sold his company to Amstrad . Sinclair's last computer was the Cambridge Z88 , which was part of the successor company he founded, Cambridge Computers Ltd. was developed and manufactured from 1987. His developments in other areas also include the C5 electric car , which, however, did not find enough buyers. The latest product from Sinclair Research is the A-Bike, a collapsible bike.

In 1983, Clive Marles Sinclair of Queen Elizabeth II. In the knighthood raised.

A television film was made by the BBC in 2009 about the creation of the BBC Micro: Micro Men, which describes the competition between the companies Acorn and Sinclair Research to produce the computer for the BBC.