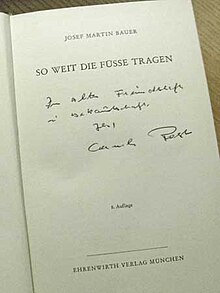 Copy of As far as the feet carry with a dedication by Cornelius Rost.

Cornelius Rost (born March 27, 1919 in Kufstein ; † October 18, 1983 in Munich ) was a German soldier in World War II , who became known under his alias Clemens Forell, under whom he allegedly escaped from a Siberian prisoner of war camp and in an adventurous way 14,000 km marched through the Soviet Union and the Far East .

In three broadcasts on Bayerischer Rundfunk on April 2nd, 3rd and 4th, 2010, the journalist Arthur Dittlmann came to the conclusion after many years of research that Rost's descriptions, apart from further improbabilities of a factual nature, cannot correspond to the truth; so he was neither an officer nor returned home in 1952, but in 1947.

Rost's alleged story was written down in 1955 by the Bavarian novelist Josef Martin Bauer after an eight-hour tape interview under the title As Far as Your Feet Wore and published as a novel. Four years later, the novel was produced for the first time for television in the form of a six-part television film - with character actor Heinz Weiss in the leading role and also under the title As Far as My Feet Wore (1959) . This multi-part car was one of the first street sweepers in the early Federal Republic.

Years later, the material was again implemented on film under the title of the same name As far as feet carry (2001) , but with a significantly different plot.