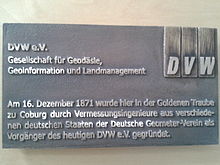 Commemorative plaque for the 140th anniversary of the founding of the DVW in the Hotel Goldene Traube, Coburg

The DVW was founded on December 16, 1871 as a technical-scientific association with the name Deutscher Geometer-Verein (DGV) in Coburg. The aim of the founding of the association at that time was to “raise and promote the entire surveying system, namely by disseminating scientific knowledge and practical experience”. The meetings organized by the association since 1872, first held in Eisenach, became known as the German Geodetic Day .

Long-time chairman Ludwig Winckel (1838–1904), who headed the German Geometer Association from 1877 to 1902, resolutely opposed the fragmentation of forces and the efforts of some branch associations to publish their own specialist journals in competition with the journal for surveying , founded in 1873 . The focus of the association's efforts at that time was the training in surveying , especially the requirement to provide the Abitur as a prerequisite for entry into the surveyor's career. After the Prussian state government indicated that it wanted to leave the property and building tax to the municipalities, they opposed the municipalization of the cadastre .

On November 30, 1919, the DGV was expanded to become the German Association for Surveying (DVV). The branch associations of the DGV, which were composed in different ways and represented different interests, were reclassified into a large association and its regional associations. From April 1, 1922, the abbreviation was DVW

Since all associations were initially banned in Germany after the end of the Second World War , a number of new surveying associations were formed in the zones of occupation between 1947 and 1949, but only in those of the western allies March 1950 in Marburg reunited to form the German Association for Surveying (DVW).

The DVW has been an association since the statutes were changed in 2000, ie it has the respective state associations as members. With the amendment of the statutes in 2010, the German Association for Surveying was renamed " DVW - Society for Geodesy, Geoinformation and Land Management eV ".

For Germany, the DVW is represented as a member of the International Association of Surveying Engineers (FIG) and is organized in the German Association of Technical and Scientific Associations (DVT).

The association has been organizing general meetings since 1872, later referred to as the German Geodetentag , which combines a specialist congress and exhibition. Since 1995 this has been operating under the name Intergeo - Congress and Trade Fair for Geodesy, Geoinformation and Land Management . Intergeo, which is held at different locations every year, has developed into the world's largest congress fair in the field of geodesy, geoinformation and land management.

Also since 1872, he has published the zfv - magazine for geodesy, geoinformation and land management (formerly the magazine for surveying) as a specialist journal .

The DVW wants to promote geodesy, geoinformation and land management in science, research and practice.

The association participates in professional training and further education and maintains international cooperation within this framework. He also cooperates with technical and scientific associations, universities and institutions. He participates in legislative procedures at the federal level that affect the areas of geodesy, geoinformation and land management. It presents the services and importance of geodesy, geoinformation and land management in public.

Participant in the meeting of the re-establishment of the German Association for Surveying in Marburg on March 7th and 8th, 1950

President or first chairman of the Geometerverein and DVW were u. a .:

On special occasions, the DVW awards honorary membership, the DVW honorary prize for the recognition of life's work or the Helmert commemorative coin to important people who have made a name for themselves in geodesy . The Harbert Book Prize is awarded to the best grades in geodesy courses at universities in Germany.

The DVW-GIS-Best-Practice-Award is given annually as part of the Intergeo . The prize is awarded to outstanding GIS projects.