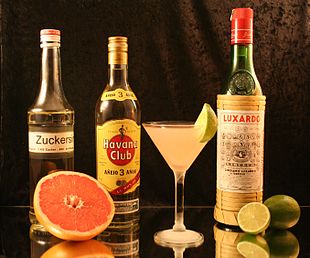 The Daiquiri is a classic cocktail based on white rum . The short drink belongs to the large Sours group and was named after the Cuban settlement Daiquirí , which is about 22 kilometers from Santiago de Cuba .

It is unlikely that the first daiquiri was actually mixed by two American mining engineers in the small Cuban town of Daiquirí around 1900, as the ingredients rum, limes and sugar were already in the entire region at that time way too common. The El Floridita bar in Havana (Cuba), where the bartender Constantino Ribalaigua Vert (nickname "Constante", the constant) served the drink to his most famous guest, Ernest Hemingway , made the daiquiri well known . The daiquiri also became popular with countless Americans who moved to Cuba to consume alcohol during Prohibition in the United States (1920–1933).

Daiquiris are served in a cocktail bowl or, as here, in a traditional martini glass.

The structure of the Daiquiri is a typical sour , consisting of white, preferably Cuban, rum as the base, freshly squeezed lime juice and (cane) sugar syrup . A typical mixing ratio of these ingredients is 5: 3: 2; the recipe of the International Bartenders Association (IBA) requires 4.5  cl rum, 2.5 cl lime juice and 1.5 cl sugar syrup; The Cocktailian bar book suggests 6 cl rum, 3 cl lime juice and 2 cl sugar syrup (2: 1). The optimal mixture in each individual case depends, as with every sour, on the specific brand of spirit used, the sweetness of the sugar syrup, the acidity of the limes and personal taste - Hemingway enjoyed his favorite cocktail, for example, preferably in the variant Papa Doble with twice as much rum and without sugar since he was diabetic . In any case, a daiquiri is shaken with ice in the cocktail shaker and then strained through a strainer , possibly even "twice" (i.e. additionally through a tea strainer ), into a pre-cooled cocktail bowl (coupette) and "straight up", i.e. without ice in the Glass, served.

There are many Daiquiri Variations: Frozen daiquiris are not in Shaker shaken but with crushed ice ( crushed ice ) in the blender prepared (Blender), it that almost freeze and a creamy sorbet get like consistency. Daiquiris that contain fruit pulp and / or fruit syrup instead of sugar syrup are popular, for example mango daiquiri , strawberry daiquiri or banana daiquiri . In the basil daiquiri , some basil leaves are shaken together and then double-strained through an additional tea strainer.

Another variant is the (Daiquiri) El Floridita , also called Daiquiri No. 3 , Hemingway Daiquiri or Hemingway Special and under the latter name also an official cocktail of the IBA, which specifies the recipe with 6  cl rum, 1.5 cl maraschino liqueur (instead of sugar syrup) and lime juice as well as 4 cl grapefruit juice ; In the Cocktailian there are 6 cl rum, 1 cl maraschino (Luxardo) and sugar syrup (2: 1), 2 cl lime juice and 3 cl pink grapefruit juice. A daiquiri with soda water and chartreuse is known as a daisy de Santiago .