The title of this article is ambiguous. Further meanings are listed under Sour (disambiguation) .

Whiskey sour, "straight up" (without ice) served in a small cocktail bowl 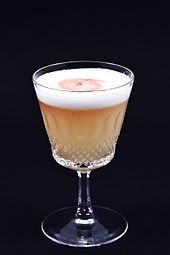 A very well-known sour is the Pisco Sour with Pisco as the basic spirit. 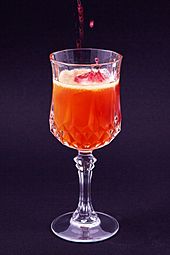 The New York Sour is based on a whiskey sour and also contains red wine and usually also protein. 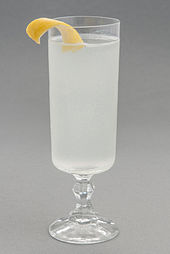 As Sour refers to an alcoholic cocktail , consisting of a spirit , lemon juice and sugar is. It is the archetype of a whole genre of cocktails, all of which are based on the basic principle of spirit + sweetener + sour citrus juice . If the spirit is a liqueur , omit or at least reduce the amount of sugar. The best-known sours, which also have the generic name in their name, are Whiskey Sour, Pisco Sour and Amaretto Sour.

The term sour covers many individual cocktails due to the interchangeability of the spirit, i.e. it describes a category. In addition, there are a large number of related cocktails that are not sours in the narrower sense of the definition, but are based on the basic principle of spirit + sweetener + sour citrus juice and vary it, i.e. belong to the sour group. Quite a few of them can in turn be divided into well-known independent categories. The most important categories of the Sour group are, besides the actual Sour, which is the original form in terms of structure, the International Sour , the New Orleans Sour , the Fizz and the Collins .

The original sours, which also have this term in their name, come from the European area and were therefore always prepared with lemon juice. But the Daiquiri and Tommy's Margarita , which contain lime juice as a sour component, are also part of these simple sours.

A category of sour variations that contains liqueur as a sweetener (not as a base spirit). Well-known examples are, besides aviation and Millionaire's Daiquiri, the representatives of the New Orleans Sours . Both sugar syrup and liqueur are used in the Bramble .

Significant subgroup of the International Sours in which the additional liqueur is an orange liqueur . A New Orleans Sour is thus based on the pattern of basic spirit - orange liqueur - sour citrus juice . Examples are Margarita , Sidecar , White Lady , Cosmopolitan and Kamikaze . The Crustas can be understood as the forerunners of the New Orleans Sours . For example, a brandy crusta is essentially a sidecar with a sugar rim on the glass, which gave the drink its name.

The Boston Sour is a special form of Whiskey Sour. The specialty is that a raw egg white (or part of it) is added to the usual mixing ratio before shaking. Concerns about a salmonella infection are not justified, as the alcohol and acid content have a bactericidal effect. For the bar there is ready-made egg white in a tube or similar, with which an exact dosage is possible.

The New York Sour is a classic whiskey sour made from rye or bourbon whiskey , lemon juice and sugar syrup, which is additionally refined with a little red wine ; The red wine is usually carefully poured over the prepared drink (technically "floated"), for example by carefully running it over the back of a bar spoon . The Continental Sour variant is similar, but here the whiskey sour is shaken with egg white (Boston Sour) and floated with Clairet , in the Paris Sour it is the Dubonnet wine aperitif .

The Fizz and the Collins are, for their part, categories of cocktails that are based in their composition on a classic sour, but topped up with soda . The basic idea of ​​the Collins and the Fizz are just as different as the origin. One is not a variation of the other. A fizz is a smaller drink and contains very little soda water, it is shaken ice cold and served without ice. A Collins is more likely to be diluted with more soda water, stirred and served over lots of ice.

Sours are prepared on ice in a cocktail shaker and then strained with a strainer into a sour glass (a small, tall stemmed glass) without ice. No decoration is required. The right temperature is important for this drink, so we recommend shaking the drink until frost forms on the shaker and, if necessary, pre-cooling the glasses. In many cases, sours are also served in cocktail bowls, also without ice, or " on the rocks " over fresh ice cubes in a tumbler . This is especially common with whiskey sour.

A ratio of 5 parts spirit, 3 parts lemon juice and 2 parts sugar syrup is mostly considered the standard. Depending on the spirit and preference, the proportion of spirit can be varied, mostly upwards. The basis of a good sour is the balance between sweet and sour. It is often recommended to taste this balance before adding the spirit.

In some bars it has become fashionable to add orange juice to the whiskey sour. This practice is very controversial because the flavors of the actual sour are masked.