A Collins (plural Collinses ) is an alcoholic cocktail that is based on the classic sour ( spirit , lemon juice, sugar syrup ), but also contains soda water like a fizz . It is one of the long drinks . Since combinations with almost any basic spirit are possible, Collinses form their own drink group and are either named after the spirit they contain ( e.g. Vodka Collins , Rum or Ron Collins , Brandy Collins ) or given nicknames that have established themselves for many common combinations . Well-known examples are the John Collins and Tom Collins , which were very popular in the United States as early as the 19th century, and are usually mixed with gin or Old Tom Gin, less often with genever or bourbon whiskey .

Collinses are first mentioned in the second half of the 19th century, a time when bars and mixed drinks were booming, especially in the United States . The combination of sweetened spirits with citrus juices - i.e. a sour and thus the basic mixture of a Collins - has always been common, for example in punch (see also Planter's Punch ), as well as the extension of mixed drinks with water or soda water, which is just like ice in the barrel became generally available in the 19th century.

There are numerous legends surrounding the origin of the earliest and most common names "John Collins" and "Tom Collins", although these have not been proven. The story of a bartender named John Collins from the London tavern Limmer's, whose specialty is said to have been gin punch , a drink popular in England in the first half of the 19th century and made from gin according to cocktail historian David Wondrich, is very common , Lemon juice, water and often maraschino liqueur . The Great Tom Collins Hoax from 1874 is often mentioned in connection with the name "Tom Collins" . It is bar fun that became popular in the United States during this period . Individual bar guests were told that a certain Tom Collins was sitting in another bar and telling insolences about them. Some visitors took this story seriously and stormed the streets in search of Mr. Collins. In addition, historians suspect a reference to the name "Old Tom Gin". In the USA, between 1800 and the mid-1880s, “gin” was generally understood to be a type of genever , also known as “Hollands”. Although it was flavored with juniper, it was burned from grain and thus had nuances that are reminiscent of whiskey , and Hollands was also slightly sweetened. In later years, when improved distillation techniques made drier (less sweet) gins possible and established themselves as Plymouth and London Dry Gins , their forerunners were referred to as Old Tom . The name "Tom Collins" could have originated in this phase, around the middle of the 1880s, from the use of Old Tom Gin instead of (London) Dry Gin .

Probably the earliest published recipe by a John Collins appeared in a bar book in the United States in 1869:

“Teaspoonful of powdered sugar, the juice of half a lemon, A wine glass of Old Tom Gin, A bottle of plain soda. Shake up, or stir up with ice. Add a slice of lemon peel to finish. "

“A teaspoon of powdered sugar, the juice of half a lemon, a glass of Old Tom Gin, a bottle of soda water. Shake or stir with ice, add a piece of lemon zest . " 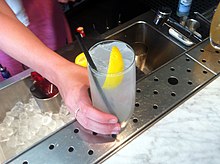 The basic mixture for a Collins is a sour, so first about 2-3 parts of a spirit , 1 part lemon juice and 1/2 - 3/4 part sugar syrup are mixed with ice cubes . The cocktail is either "built", i.e. made directly in the guest glass, or the basic mixture is first shaken with ice cubes in the cocktail shaker or stirred in a mixing glass with a bar spoon and then strained onto fresh ice cubes in a long drink glass . In the second step, cold soda water is then poured over and carefully stirred. For a John Collins according to the recipe of the International Bartenders Association (IBA), 4.5 cl gin (or Old Tom Gin for a Tom Collins ), 3 cl lemon juice, 1.5 cl sugar syrup and 6 cl soda water are poured directly into ice cubes optionally filled Collins glass, gently stirred, the drink with a Dash (splashes) Angostura rounded and with a slice of lemon and a maraschino decorated.

It is common to use high-proof basic spirits such as gin, vodka, whiskey, brandy, rum or tequila. But collinses with fruit brandies or based on liqueurs are also possible; with the latter, the sugar content in the sour mixture is reduced or left out.

Collinses are often referred to with nicknames from the countries of origin of the basic spirit, for example:

Difference Between Collins and Fizz

It is difficult to differentiate between Collins and Fizz , as both drinks are soda-added sours. Often the recipes are the same or only differ in details. The "official" recipes for a Gin Fizz and a John Collins from the International Bartenders Association differ, for example, in that the Gin Fizz is not built in the glass, but the sour mixture is shaken separately with ice and only then filled with soda in the guest glass . In addition, it is served in a tumbler without ice cubes , whereas the Collins is served in a Collins or long drink glass filled with ice cubes. In some cases, a differentiation is made according to the size and a smaller glass (Fizz or highball glass as opposed to the larger Collins glass ) and smaller quantities of ingredients are provided for the Fizz . The bartender Stephan Hinz According Fizz is a only a "slightly aufgefizzter Sour ", ie an extended with very little soda short drink that is served in a fizz glass without ice. The Collins, on the other hand, is often seen as a real long drink, more soda is used and usually served with ice cubes in a tall glass. However, all distinctions are not uniform, and numerous contradicting statements can be made in the literature.