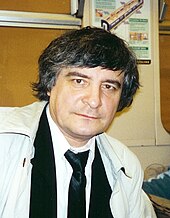 Dmitri Smirnov was born the son of opera singers. The family first moved to Ulan-Ude , Buryat Republic (Central Asia), then to Frunze , Kyrgyzstan , where Smirnov spent his childhood. In 1967 he began studying music at the Moscow Conservatory . There he learned composition with Vladimir Fere and Nikolai Sidelnikow , instrumentation with Edison Denisov and analysis with Yuri Cholopow . In 1970 he made the acquaintance of Philip Herschkowitz , the Webern student who had moved from Vienna to Moscow . In 1972 Smirnov finished his studies and from 1973 worked as an editor at the Sowetski Kompositor publishing house . In 1976 his solo for harp won first prize at the Maastricht International Harp Week competition and he became internationally known. From 1981 to 1993 Smirnow worked as a freelance composer. During this time, in 1991, he moved to Great Britain. In 1992 he received a scholarship from St. John College and was visiting professor at Keele University from 1993 to 1997, as was his wife, the composer Jelena Olegowna Firsowa . There he was also composer in residence . From 1998 Dmitri Smirnow worked freelance again.

Opera in 3 acts based on a poem by William Blake , German text: Paul Esterházy

for choir a cappella