from Wikipedia, the free encyclopedia
This is the spotted version , flagged on February 28, 2020 . There are 2 pending changes that have yet to be viewed.

Don Ed Hardy at the Tattoo Convention in Sacramento Cal., 1980

Donald Edward Talbott “Ed” Hardy (born January 5, 1945 in Des Moines , Iowa ) is an American tattoo artist , author and designer . "Hardy was the first star tattoo artist in the mid-1970s". His works are also exhibited in museums around the world.

Born in Iowa, Hardy grew up from the age of one year in Southern California Newport Beach in the district of Corona del Mar on. He started drawing early and had his first exhibition at the Laguna Beach Art Festival. After graduating from high school, he began training as a tattoo artist with Phil Sparrow and, from 1967, studied printing technology at the San Francisco Art Institute . From 1973 he lived in Japan, where he learned from the traditional Japanese tattoo master Horihide and in 1974 he founded his own tattoo studio in San Francisco . During the 1980s he repeated his studies in Japan. There he met Horiyoshi III , with whom he published the book Tattoo Designs of Japan in 1987 and has been on friendly terms ever since.

In 1982, he and his wife, Francesca Passalacqua, founded Hardy Marks Publications . They wrote, edited and published 25 books, including the five volumes Tattoo-Time and some works of alternative art. In 1986 they moved to Honolulu and Hardy began painting, drawing, and printing again. He still runs his tattoo studio in San Francisco to this day, where younger tattoo artists continued his work and continue his style. He himself gave up tattooing in 2009.

“We were all looking for a freer society. Back then, I set myself the goal of freeing tattoos from their taboo. A tattoo doesn't hurt anyone, it's a very personal thing. So everyone should be able to have one. "

“There's a reason more people wear tattoos today than ever before. In a world where everything is going digital and religion and origin are losing their meaning, a tattoo shows who you are. "

"" I stopped because my hands didn't want to anymore. I have had arthritis for years and two artificial hip joints. As a tattoo artist you are first class for a certain period of time, but it was always bad when one of them passed its zenith. ""

In 1995, Hardy showed the exhibition Pierced Hearts and True Love at the New York Art Gallery (Drawing Center) . In this exhibition, which was a "decisive step towards improving the image of tattooing", Hardy gave a historical overview of the past 100 years. 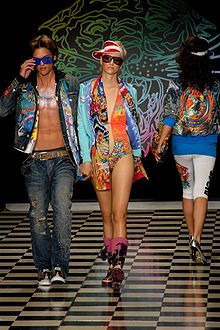 In 2002, Hardy founded the Ed Hardy fashion label , which was licensed by Christian Audigier in 2004 . The clothes are particularly characterized by colorful tattoo motifs. In addition, accessories such as sunglasses, bags, bed linen, perfume, lighters, energy drinks and beer appeared from the series.

In Germany, the brand has now lost popularity, as the tattoo motifs and striking slogans, which are always similar, are considered styleless. The German press described Audigier as "designer proll ", Hardy said:

"I don't judge anyone for how they live and dress, but I don't wear Ed Hardy T-shirts myself."