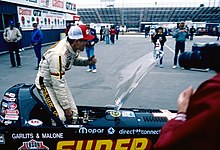 Donald Glenn "Don" Garlits (born January 14, 1932 in Tampa , Florida ; nickname Big Daddy ) is an American racing driver and designer of drag cars . He is considered a pioneer of modern top fuel acceleration racing. Garlits was the first to officially hit 170, 180, 200, 240, 250, and 270 mph speed marks on the quarter mile . On the eighth mile, he was the first to reach 200 miles an hour. He won 17 world championships, 8 US championships and 144 national events. In 2001 the National Hot Rod Association (NHRA) compiled a list of the 50 most important drag racers of the time for its 50th anniversary, with Don Garlits in first place. He has been inducted into the International Motorsports Hall of Fame , the Automotive Hall of Fame and the Motorsports Hall of Fame of America , among others .

Garlits drove a modified car as a teenager. However, when he met his future wife in 1952, he bought a standard used Ford and was out of the racetrack for about eight months. In March 1953 he happened to pass a racing event with his wife and spontaneously took part in it with his Ford. Garlits won and the young couple decided to get into acceleration racing . In 1955 Garlits took part in his first race organized by the NHRA with a self-built dragster and won. In 1956 he built the Dragster Swamp Council , with which he achieved further successes and records. The name "Swamp Rat" (swamp rat) should allude with a wink to Garlits' homeland Florida and the vehicle was also the first of over 30 other dragsters built by or for Don Garlits with the same name.

On June 29, 1959 in Chester, South Carolina , the Swamp Rat compressor exploded , causing Garlit's third degree burns to his hands and face. During his recovery he was already working on new vehicles; Since then he has also been involved in the widespread use of heat protective clothing in racing. He continued to announce his retirement as a driver, but he did not put it into practice.

In 1963 Garlits joined the NHRA Winternationals with Swamp Rat V (occasionally the designation VA or 5A also appears to differentiate the vehicle from the later B variant with a longer wheelbase). For the first time on a dragster, a large wing was installed above the engine of this car to increase traction at high speeds. Garlits succeeded with this concept and won the Nationals.

At the start of the final run of the AHRA Grand American on March 8, 1970, Swamp Rat 13's two- speed transmission burst and split the vehicle in two. Garlit's left leg and foot were broken and a large piece of his right foot was torn off. Garlits was evacuated from the vehicle by Mickey Thompson and was hospitalized for six weeks. Since accidents with personal injury due to the failure of moving parts regularly happened at that time, Garlits developed concepts to reduce the risks. In addition to the encapsulation of the clutch and gearbox to avoid flying debris, he saw the need to fundamentally change the design of the dragster.

At that time, dragsters had a mid-engine, the cockpit was behind the engine and rear axle. This construction, called slingshot and first demonstrated by Mickey Thompson in 1954 in drag racing, had indeed produced the greatest racing successes to date. But in the event of a technical failure, debris, operating materials or even flames were thrown in the direction of the driver. Garlits saw it as essential to put the cockpit in front of the engine.

His next vehicle, Swamp Rat 14 , was implemented this way, but during test drives the steering turned out to be problematic. Garlits and his team were certain that this vehicle would not be ready in time for the upcoming races, so Swamp Rat 15 was built in the well-known Slingshot construction. For Garlits' wife Pat, security outweighed the deadline pressure. She persuaded the team to continue work on Swamp Council 14 . The steering was modified and the vehicle surprisingly successfully completed several races in 1971. Although Garlits' car was not the first dragster to use this design, it became the standard after its success. Swamp Rat 15 was not used in racing and was sold.

At the end of 1972 test drives took place with Swamp Rat 17 , a top fuel dragster with a streamlined body made of fiberglass. However, there were problems with buoyancy at a speed of 180 miles per hour, so that this vehicle was taken out of service after a short time. Other attempts to deviate from the proven design ( Swamp Rat 27 with a transversely installed engine block, Swamp Rat 28 with a turbine) were also impractical.

In 1987 Garlits with Swamp Rat 31 was again the victim of an accident due to buoyancy at the front. He suffered multiple injuries and retired from Top Fuel Drag Racing. In 1988 Garlits fulfilled his wish to drive his own high-speed vehicle ( Swamp Rat 33 ) on the Bonneville Flats . In December 1991, he returned to drag racing with Swamp Rat 32 and resolved to be the first to break the 300 mph mark. This did not work. In 1992 Garlits developed symptoms of retinal detachment . He was advised against further races, as the Parachute-assisted braking deceleration of the Top Fuel Dragster would encourage further progression of the disease. Garlits followed the advice, fearing total blindness.

In 2001, however, he returned to drag racing and drove his personal best up to then of 4.720 seconds with a borrowed dragster. In 2002 he appeared at some competitions with the Swamp Rat 34, which had meanwhile been established , and in 2003 he reached his personal top speed of 323.04 miles per hour at the Gatornationals at the age of 71. In the same year he finally gave up top fuel drag racing.

In September 2009, Garlits returned to the acceleration competitions, but no longer in the top fuel class. He participated in the NHRA Stock Eliminations with a performance-enhanced ( Mopar Drag Pak) Dodge Challenger . In addition to the usual sponsor logos, the vehicle bore the words Garlits' Dodge and Swamp Rat 35 . Since then, Garlits can be seen at various motorsport events, including shows with his previous dragsters and also with his current Swamp Rat 36 , a Dodge Challenger with a V10 engine and in the black color used by the Swamp Rats. For 2014, Garlits plans to use the all-electric dragster Swamp Rat 37 to reach 200 miles per hour on a dragstrip.

Life outside of motorsport

After graduating from high school , Garlits worked in a can factory and served in the Florida National Guard . In 1953 he married his girlfriend Patricia Louise "Pat" Bieger (1934-2014), with whom he has two daughters.

From 1958 to 1959, Garlits was elected president of the American Hot Rod Association . He is also the founder and was also President of the Professional Racers Organization (PRO) from 1972 to 1976.

Garlits has been running the Don Garlits Museum of Drag Racing since the early 1980s, which includes most of the remaining Swamp Rats on display.

In 1994 he ran as a candidate for the Republican Party in the 5th Congressional constituency of Florida, but could not win the election. In 2008 he supported Ron Paul's candidacy for the presidential election .