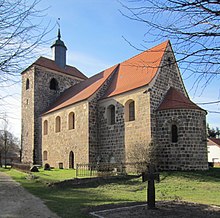 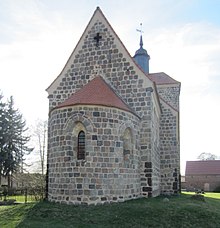 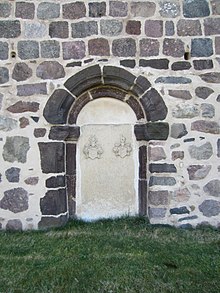 Walled up north portal with tombstone

The Waltersdorf Church is a late Romanesque hall building made of lawn iron and field stone blocks with a retracted, square choir, an east apse and the west transverse tower slightly protruding from the nave walls. The west tower and parts of the ship were created in two clearly defined sections. It was started in the first half of the 13th century and completed after the middle of the 13th century. From the first phase, the lower wall zones of the tower are made of significantly coarser masonry with a corner border made of lawn iron stone. On the north side of the ship there is a stepped round arch portal with well-formed profiles ( ship throat ) and transoms in a similar wall section . In the throat of the left garment there is a weathered head that was added around 1220/30. The openings in the apse are slightly ogival and have a square frame, over which lies a flat layer; the other openings are arched in brick. The priest's gate has been preserved on the south side , the old south portal was walled up. The smaller south portal, which was formerly behind the patron's box, was renewed in 1934. The interior is lit by uniformly large arched windows in brick edging and accessed from a west portal. Both the windows and the portal were probably enlarged towards the end of the 18th century. The tower shows a small circular window on the west side, the bell storey with simple ogival sound openings is a little younger; the turret on the hipped roof dates from 1790. A restoration took place in 1934. In the years 1994–96, the building was restored after a long period of neglect and decay and inaugurated again in 1997.

The interior is closed by a wooden ceiling, the apse closes with a semi-dome. Both the triumphal arch and the apse arch are designed as steep pointed arches; the large opening to the tower was walled up. A horseshoe gallery was built in the first half of the 19th century. Two rectangular niches are arranged in the apse to the south and north. On the south wall of the choir there are remains of late Gothic wall paintings, including three scenes depicting vices and deadly sins and a curtain painting from the end of the 15th century.

The altarpiece from the third quarter of the 17th century was restored in 1934; the baroque version was uncovered and restored in 2004. It consists of an aedicule in strict architectural forms with side cheeks with coat of arms medallions; the 1934 acanthus cheeks were added; Figures of evangelists from the mid-18th century are arranged on the entablature. The Last Supper painting of the predella dates from 1626.

The pulpit with a basket with corner pillars on a baluster support and a sound cover with a crowning pine cone dates from the third quarter of the 17th century. The sandstone baptism, dated 1766, shows an eight-sided vase shape with rocailles decoration and is adorned on the main sides with heraldic cartouches and angel heads; A putto carries the lectern on the wooden lid .

Outside, in the added north portal, a tombstone of Caspar Siegismund von Muschwitz († 1708) is attached. The organ in an organ front with rococo decor from 1749 is the work of organ builder Carl Gotthold Claunigk from 1793 from Sonnewalde. It was restored in 1998/99 by Orgelbau Waltershausen / Thuringia and has ten stops on a manual and pedal .