Eider Danes is the name given to Danish national liberals in the 19th century who wanted to integrate the Duchy of Schleswig into the Kingdom of Denmark and accordingly spoke out in favor of the Eider as the German-Danish border. The leading representative of the eider policy , Orla Lehmann , formulated the eider program in 1842 . From this the slogan "Danmark til Ejderen!" (German: Denmark to the Eider!) Was derived, which opposed the slogan of the German national liberals " Up eternally ungedled ". 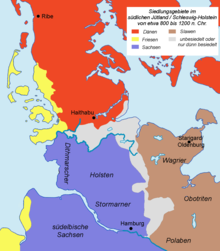 The Eider formed the northern border of the Holy Roman Empire until 1806 and the German Confederation from 1815–1864.

Shares of Schleswig, Holstein and Lauenburg in the total number of inhabitants

Together with the Levensau, the Eider marked the southern border of the Duchy of Schleswig and, since 1815, the northern border of the German Confederation . Schleswig had been a Danish fiefdom since the Middle Ages , Holstein a fiefdom of the Roman-German Empire . With the demand for a complete integration of Schleswig into the Kingdom of Denmark, the Eider-Danish oriented national liberals stood in irreconcilable opposition to the German national liberals, which favored the admission of Schleswig and Holstein into the German Confederation as a German double duchy.

Both liberal groups united the demand for a constitution and fundamental freedoms; both stood in opposition to the enlightened-absolutist government in Copenhagen , which was monarchical and conservative and aimed to preserve the historically grown Danish state while preserving regionally different political orders.

After the death of Christian VIII on January 20, 1848, the Danish National Liberals demanded a constitution from the new King Frederick VII that included Schleswig. But the government had other plans and on January 28th issued the Forfatningsreskript ("constitutional decree "). Fifty-two representatives from all over the state were convened to discuss the procedure for a free constitution. These men were to be elected partly from the midst of the estates, partly named by the king, the universities, the clergy and the knighthood. The representatives from the duchies of Schleswig , Holstein and Lauenburg were to take half of the seats, the other half consisted of representatives from the rest of the kingdom.

In March 1848, however, the king felt compelled to appoint a bourgeois government ( March Ministry ) for the first time , made up of national liberals and conservative supporters of the state. The German-minded people in the duchies feared the incorporation of Schleswig into the kingdom, so that in the same month they formed a provisional government in Kiel made up of German national liberals and conservatives. While the Danish National Liberals wanted Schleswig to be integrated into the Kingdom of Denmark, the German National Liberals called for a united Schleswig-Holstein to join the German Confederation under the slogan " Up forever ungedled ". As a result, there was the Schleswig-Holstein uprising (referred to in Danish as the “Three Years War” or “Rebellion”). However, both in the Paulskirche constitution of March 1849 and in the Danish Basic Law (Grundlov) of June 1849 the question of Schleswig's national affiliation was left open.

The civil war ended in 1851 with the return to the moderately conservative regiment. In many municipalities in Central Schleswig, in the same year, in response to the progressive change of language from Danish to German, Danish language scripts were introduced. They essentially replaced the German language as the language of instruction in favor of Danish and, in the area of ​​church language, led to a coexistence of German and Danish.

A year later, the London Protocol guaranteed the integrity of the entire Danish state as a “European necessity and permanent principle”. At the same time, the duchies should be treated as independent units and, above all, Schleswig should not be more closely tied to Denmark under constitutional law than before. Nevertheless, in 1858 the German Bundestag in Frankfurt repealed the constitution applicable to the entire state in the Duchy of Holstein.

At the beginning of the 1860s, ministers from the Eider-Danish Party were again involved in the government in Copenhagen. After the entire state constitution of 1855 was rejected by both the German Confederation and the Holstein Assembly of Estates, the Danish government passed the so-called November constitution in November 1863 , which constitutionally bound the Duchy of Schleswig more closely to Denmark and removed it from Holstein, which, from a German perspective, was a breach of the Provisions of the London Protocol of 1852 were in place. This prompted the German Confederation in December 1863 to carry out a federal execution in the Duchy of Holstein . After the Danish government had not withdrawn the November constitution, on February 2, 1864, Prussian and Austrian troops finally crossed the Eider to Schleswig in protest of the German Confederation, causing the German-Danish war between Prussia and Austria on the one hand and Denmark on the other broke out. Negotiations on a possible national division of Schleswig at the London Conference in 1864 failed. As a result, Denmark had to cede Schleswig and Holstein to Prussia and Austria on October 30, 1864.

With that the Eider-Danish policy had failed. The peace treaty between Prussia and Austria in 1866 held out the prospect of a referendum on the determination of the Danish southern border. But the Prussian government should never show interest in implementation.

After the First World War there was the historical possibility of regaining Schleswig or parts of it for Denmark. With regard to a future German-Danish border, essentially three positions developed on the Danish side. On the one hand, it was argued for a return of North Schleswig without the inclusion of Flensburg, on the other hand for a return of North Schleswig with the inclusion of Flensburg and, on the other hand, for a return of Schleswig to the Danewerk. The possibility of a third voting zone up to the Danewerk was rejected by the left-liberal Zahle II government at the Paris Peace Conference in 1919 , so that in the end voting was carried out in two voting zones in northern and central Schleswig. There were no more votes in southern Schleswig. The northern zone later formed the Sønderjyllands Amt , today part of the Syddanmark region . The middle zone today forms the northern part of what is now southern Schleswig in the state of Schleswig-Holstein . In 1920 there was a domestic political controversy, in particular about whether the city of Flensburg remained with Germany, which led to the dismissal of the left-liberal government by King Christian X. and led to a constitutional crisis.