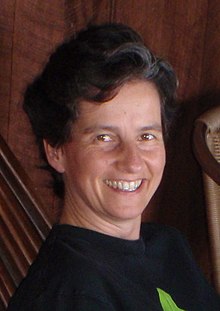 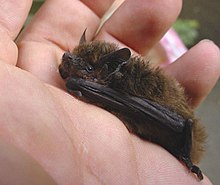 Kalko worked a. a. to the pipistrelle

Elisabeth Klara Viktoria Kalko (born April 10, 1962 in Berlin ; † September 26, 2011 in Nkweseko , Hai District , Tanzania ) was a German tropical researcher and ecologist . She was director of the Institute for Experimental Ecology at Ulm University , was a member of the scientific staff at the Smithsonian Tropical Research Institute (STRI) in Panama and was also a research assistant at the American Museum of Natural History (AMNH) in Washington, DC, USA.

Elisabeth Kalko grew up in Heilbronn from 1964 . She showed an early interest in wild animals, was involved in toad protection and took an advanced course in biology at the Justinus-Kerner-Gymnasium Heilbronn , where she graduated from high school .

Kalko began studying biology at the University of Tübingen , which she graduated with a diploma. In 1991 the doctorate followed in Tübingen . She received a scholarship from the German National Academic Foundation in both phases . The topic of her dissertation was The echolocation and hunting behavior of the three European pipistrelle bat species, Pipistrellus pipistrellus (Schreber, 1774), Pipistrellus nathusii (Keyserling et Blasius, 1839) and Pipistrellus kuhlii (Kuhl, 1819), in the field . From 1991 to 1993 Kalko worked as a postdoc with a NATO fellowship at the American Museum of Natural History in Washington, DC, USA. From 1993 to 1997 she was involved in two DFG projects on tropical diversity before completing her habilitation in Tübingen in 1999 as a Heisenberg fellow from the DFG.

Since 1999, the scientist has worked at the Smithsonian Tropical Research Institute in Panama. She spent several stays at scientific institutes such as the National Museum of Natural History in Washington, DC and undertook expeditions to the Congo and field studies in several European countries. Since 2000, in addition to her work in Panama, she has also been professor and director of the Institute for Experimental Ecology at the University of Ulm .

Kalko was a member of the National Committee for Global Change Research (NKGCF) (2002–2011) and was a member of the Heidelberg Academy of Sciences for life (since 2006). From 2005 to 2011 she was the elected Vice President of the Society for Tropical Ecology (GTÖ) and since 2008 a member of the Senate Commission on Biodiversity of the German Research Foundation (DFG). Since 2008 she has headed the German section of DIVERSITAS International , since 2010 as the founding chair of DIVERSITAS Deutschland e. V.

Kalko died as one of the world's leading experts in tropical ecology and bat research on September 26, 2011 during a visit to Tanzania for a DFG project she was co- leading .

Kalko led numerous research projects focusing on the anthropogenic influence on biodiversity, the functionality of vertebrate communities and the interface between ecology and health. In German and US media, Elisabeth Kalko was a sought-after expert on bats , her main subject of study. Her main research interests were bioacoustics and community ecology .

She was jointly responsible for the network of biodiversity exploratories (DFG project) in Germany.

Kalko has published in internationally renowned journals and books and was the editor of the specialist journal for tropical ecology Ecotropica .

The non-profit Elisabeth Kalko Foundation was established in 2013 in memory of Elisabeth Kalko. The purpose of the foundation is to promote science and research. The purpose of the foundation is achieved in particular through the award of grants to support scientific research work by natural persons such as diploma students, master's students, doctoral students and postdocs who, among other things, deal with zoological aspects of tropical biodiversity and experimental ecology of animals and do fieldwork for this purpose carry out abroad.