With unbridled flash in which you referred Photography use a flash unit, the space of the camera is disconnected.

The flash unit is controlled either via a connection cable or wirelessly. The wireless transmission takes place via infrared , radio or a triggering by the flash of another flash. With exposure times of several seconds or more, the flash unit can also be triggered manually.

Common names for the device or flash used to control the other flashes are: master, transmitter or main flash.

Modern system cameras can operate several flash units together and integrate them into the automatic exposure measurement.

Due to the pre-flashes that are common with digital cameras and their built-in flash units (e.g. to measure the distance to the subject and the exposure), conventional servo flash units and triggers cannot be used here. Rather, those with special circuits are required that ignore pre-flashes and only ignite during the actual main flash. The additional pre-flash against red eyes must also remain switched off.

In the beginning it was only possible to optically trigger further flashes via a photo cell, but soon triggering via radio signals was possible, which had the advantage that the triggering worked over long distances and even through walls or obstacles. In their basic function, these triggering systems only worked as a transmitter of a trigger signal for the flash. The power had to be set manually on the flash.

There are radio trigger systems that enable the transmission of data between the camera and the flash and thus the use of TTL automatics for flash control. Modern control systems can divide the devices into individual groups when controlling several flashes. Each group can be set individually in terms of the lighting intensity and the trigger time, so that very differentiated lighting scenarios are possible. 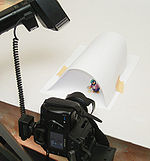 Unleashed lightning at close range with an improvised light tent

Nocturnal shot with the flash unleashed