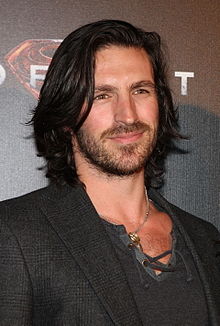 Macken started his modeling and acting career at University College Dublin. There he took part in a fashion show in 2002 and 2003. There he took courses in "Acting, Movement & Stage", trained in "Advanced Acting for Camera" at the Gaiety School, attended the "Stanislavsky" workshop with Vincent Chase in Los Angeles and took part in the " Meisner Technique " with Nina Murrano in New York . In 2003 he was selected as the face for the Abercrombie & Fitch fashion company .

Since 2006, Macken has starred in various television series and films. From 2007 to 2010, for example, he was seen as an officer in the series The Tudors . In 2008 he had his first leading role in the psychological thriller Christian Blake . He also directed and wrote the script for this film. From 2010 to 2012 he was a permanent member of the television series Merlin - The New Adventure . He also played a minor role in Neil Marshall's Centurion at the side of Michael Fassbender in 2010 . Other film and television roles followed.