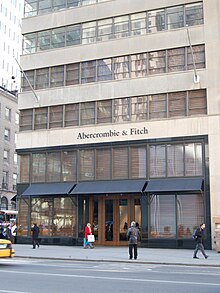 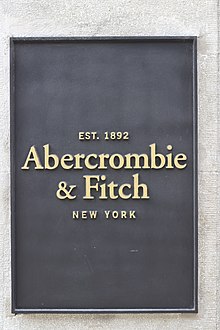 Abercrombie & Fitch Co. ([ æbɝkɻɒmbi Rev. fɪʧ ] shortly A & F ) is a US-based fashion company , based in New Albany ( Ohio ), which also includes the brands Abercrombie kids and Hollister are.

On June 4, 1892, David Abercrombie opened a fishing tackle shop on South Street in Downtown Manhattan , thereby founding the Abercrombie Co. The original shop was an elite outfitter for sports and excursion goods and was known for quality shotguns , fishing rods and tents .

Abercrombie quickly made friends with manager Ezra Fitch , who lived in New York City , was one of his regular customers and believed strongly in the success of the young company. So Ezra Fitch finally bought 49% of the company's shares in February 1900. In 1904 the company was renamed Abercrombie & Fitch Co. Later, Abercrombie and Fitch got into an argument over expansion visions on the part of Fitch. Ezra Fitch wanted to branch offices throughout the state of New York open and the company to a specialty store for camping utensils expand. However, Abercrombie preferred to concentrate on expanding its Manhattan business and was against Fitch's plans. The cooperation between the two gentlemen failed because of this question. Abercrombie therefore offered Fitch its shares for purchase.

In September 1907, David Abercrombie sold all of his shares in Ezra Fitch and left the company. The product range was expanded to include women's clothing, shoes, cameras and board games in the following decades. In the 1920s, Abercrombie & Fitch was one of the most important importers of the Chinese board game Mah-Jongg .

Additional stores opened in California, Florida, and New Jersey in the 1950s. In the summer of 1976, the company had to file for bankruptcy and closed its flagship store in Manhattan in 1977 . From 1978 the disused company name was owned by Oshman's Sporting Goods , which operated a mail order business specializing in hunting clothing and opened stores in Beverly Hills , Dallas and New York under the name .

In addition to Abercrombie & Fitch, the company also owns the brands Hollister , Gilly Hicks and Abercrombie Kids . Until January 2010, Ruehl No.925 was also part of the company. Since the Gilly Hicks stores closed in 2014, these products have been sold in Hollister stores.

In February 2014 the company operated 1006 branches. At the end of 2017 there were still a total of 889 branches, of which 348 were Abercrombie and 541 Hollister branches. In addition to its branches in North America, where the company is represented in Canada , the United States and Puerto Rico , the company has 16 stores in Europe and seven in Asia.

German trademark law protects the exclusive distribution channels, so that the resale of branded products can be a trademark infringement. This is the basis for numerous warnings with which the company took action against resellers in Europe when the brand was not yet active on the European market.

A feature of Abercrombie & Fitch clothing is the moose . The photo series by Bruce Weber in the catalog, which shapes the appearance of the brand, set the style.

In 2003 Abercrombie & Fitch was sued for racism . The trial ended in November 2004, and the company paid the 10,000 victims a total of $ 40 million. The people are said to have been disadvantaged in their application, since almost exclusively white people worked for the company. The agreement also included agreements promoting equal rights.

In 2003, the company paid $ 2.2 million to 11,000 former employees who had to buy the company's clothing as workwear and their hourly wages were sometimes below the statutory minimum wage as a result. Abercrombie & Fitch undertook to refrain from doing this in the future.

The company came under fire in 2006 when Michael Jeffries said in an interview that “our fashion is only intended for cool, good-looking people.” This statement and the fact that women’s clothing is only available up to size L (in Europe: 40) , were z. T. perceived as discriminatory. For male customers, Abercrombie & Fitch offers clothing in XL and XXL.

In the London flagship store, an employee with a forearm prosthesis was transferred to the warehouse by employees of the “visual team” who are responsible for “aesthetic matters”. The company was therefore ordered to pay compensation.

In September 2009, the company was fined $ 115,264 for discrimination against an autistic girl who was not allowed to be helped by her sister in the locker room.

In November 2009, Abercrombie & Fitch was inducted into the 2010 Sweatshop Hall of Shame by the International Labor Rights Forum. The company is accused of using child labor to manufacture clothing in the Philippines for low wages and under human rights violating working conditions.

In August 2011, it was announced that the company had offered actors on the Jersey Shore reality show money to stop wearing the brand's clothing.

In April 2013, the business magazine Plusminus researched the working conditions in Bangalore , India , under which products are manufactured for the company. Recordings at a manufacturer who, according to its own statements, produces for Abercrombie & Fitch, among others, show an unsanitary work environment and how unprotected workers worked with improperly stored chemicals. According to the head of the textile factory, the rooms would heat up to over 45 degrees in the summer months. Workers reported working overtime and their monthly wages of around 10,000 rupees (about 145 euros). In addition, workers are prohibited from organizing.

In mid-April 2013, TÜV Rheinland examined items of clothing from Abercrombie & Fitch and found carcinogenic benzidine in a product in a concentration of over 100 milligrams per kilogram - more than three times the legal maximum. According to a professor of toxicology, the clothes were “not marketable” and “should not be sold”.

In 2013, the company was criticized because faulty clothing was not donated to social institutions, but rather burned. According to a fashion analyst, Abercrombie & Fitch “wants to avoid the impression that poor people can also afford these items of clothing.” This resulted in global resistance, and users on social networks called for Abercrombie & Fitch clothing to be given away to the homeless .

After complaints from residents and passers-by, the company had to reduce the perfume scent outside of its branches in Munich and Hamburg.

In May 2013, the company and Aldi , H&M and Zara and others signed an agreement on more safety in fashion production in Bangladesh. The initiative was stimulated by the collapse of a factory building with over 1,100 people killed. The binding agreement provides for improvements in fire and building protection.

In June 2014, Abercrombie & Fitch was accused of offering the clothing size Triple Zero, which corresponds to a waist size of 58.5 centimeters. Abercrombie & Fitch denied the allegation, claiming that it was not a new product, but an error in the size chart. According to their own statements, Abercrombie & Fitch has not offered this size since 2012. The incident drew a lot of media coverage.

The company was also criticized for selling push-up bikinis for seven- year-olds and thongs for ten-year-olds.

In the “Retail Report 2015” of the renowned “American Customer Satisfaction Index (ACSI)”, in which 70,000 customers rated more than 300 companies, Abercrombie & Fitch came last and also achieved the lowest satisfaction value in the 22-year history of the Reports ever measured.

Abercrombie & Fitch became known through the Howard Hawks film Man's Favorite Sport? ( A Goldfish on a Leash ) from 1964 with Rock Hudson and Paula Prentiss in the lead roles. Hudson plays an employee in the fishing department of Abercrombie & Fitch, who, although he has never fished himself, is a successful author of a textbook on fishing. He was cleverly able to keep this a secret until one day his boss (John McGiver) signs his hero up for a fishing competition in order to increase sales.