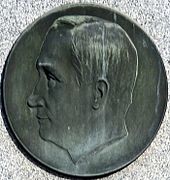 Ernst Tautenhayn was a son of the sculptor Josef Tautenhayn . Without training, he received an engagement at the Lindentheater in Berlin, as a singer and actor from 1893–95 in Graz and at the Carltheater in Vienna. Then at the Landestheater in Linz, member of the German Theater in Prague. From 1910 to 1920 he was an operetta tenor at the Theater an der Wien and later at the Bürger-, Carl- and Johann Strauss-Theater in Vienna. He also appeared in the Vienna Volksoper . Tautenhayn was married to the singer Therese Schiner .

On the occasion of the “referendum” after the annexation of Austria in 1938, he wrote: “For me, this 'yes' is the most beautiful 'yes' of my life.” In 1941 he became a professor at the newly opened operetta school in Vienna.

For a long time he had only worked in guest roles, finally the Opera House of the City of Vienna hired him again for earlier brilliant roles of him and organized a festival performance of the "Fledermaus" on the occasion of his 70th birthday in 1943, in which he appeared as a frog for the last time .

His honorary grave is located in the Vienna Central Cemetery (30E-3-8).