Erté ([ɛʁ.te], actually Romain de Tirtoff , born November 23, 1892 in Saint Petersburg , Russian Empire , † April 21, 1990 in Paris , France ) was a Russian-French illustrator , set designer and fashion designer . With his illustrations and fashion creations, Erté is one of the main representatives of Art Deco . His style is characterized by synthetic cubism combined with exotic decorativism . 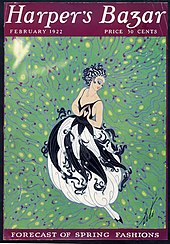 One of several designs for bottles for the cognac manufacturer Courvoisier .

Evening dress made of beaded lamé , in the Rijksmuseum Amsterdam .

Between 1912 and 1914 Erté drew the models of the Parisian fashion designer Paul Poiret for the press and his customers. From 1915 the fashion magazine Harper's Bazaar published his drawings. From 1916 to 1937 he worked for Harper's Bazaar, where he designed front pages and fashion illustrations. His illustrations have also been published in Vogue , Cosmopolitan , Femina and Art et Industrie magazines. Erté also devoted himself to the costume and set design of film (1925 film costumes for Metro-Goldwyn-Mayer ), revue (1970 to 1974, revues by Roland Petit with Zizi Jeanmaire ; André Heller's revue "Flic Flac"), theater and opera .

His designs included dresses and accessories for women, costumes and sets for opera, ballet and drama, as well as posters and prints. His pen and gouache illustrations show models mostly in poses, draped with luxurious pieces of jewelry, feathers, and soft, flowing materials, against the backdrop of Art Deco-style interiors.

The same luscious style shaped Erté's theatrical designs. For 35 years he designed lavishly structured opening and final scenes as well as costumes for the French theater. From 1919 to 1930 he worked for the Folies Bergère in Paris. In the 1920s he designed costumes for the artists who appeared in American revues such as the Ziegfeld Follies and George White's Scandals . In the 1960s, Erté made lithographs, screen prints and statuettes made of metal.