The Faraday cage (also known as Faraday cage ) is an all-round closed shell made of an electrical conductor (e.g. wire mesh or sheet metal) that acts as an electrical shield . With external static or quasi-static electrical fields , the inner area remains field-free due to the influence . In the case of processes that vary over time, such as electromagnetic waves , the shielding effect is based on the eddy currents that form in the conductive shell and counteract the external electromagnetic field. Static or slowly varying magnetic fields (like the earth's magnetic field) are not shielded by a Faraday cage. 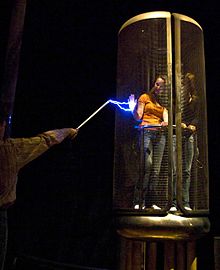 Faraday cage, occupied with test subjects in the field-free interior

The term goes back to the English physicist Michael Faraday (1791–1867). The quantity of the shielding effect is recorded via the shielding attenuation ( e.g. a shield ).

A Faraday cage leads, among other things, to the following effects:

Animation of the charge shift in a Faraday cage

The shielding of electrostatic or quasi-stationary electrical fields is based on the effect of the influence . If an electrically conductive shell, for example a hollow sphere, is brought into an externally applied electrostatic field E , the effect of the force on the charges Q, which can move freely in the shell , results in a spatial redistribution of the charges on the surface until the one tangential to the surface external electric field component becomes zero and a balance is found. As a result, in the static case, the electrical flow originates or ends on the surface of the envelope, so that the interior of the envelope remains field-free. This shielding effect is not tied to a specific shape of the shell and occurs with hollow bodies of any shape, provided they are electrically conductive.

With a completely closed conductive envelope, the attenuation is ideal and infinitely great in the static case; with quasi-stationary fields this is met with a good approximation. With the help of Gaussian law , the normal components of the electric field in the empty outer space directly above the envelope can be:

and in the interior too

determine with the surface charge density and the dielectric constant .

The conductive envelope is an equipotential surface , which is called an electrical wall in parlance. It is essential that the shielding effect only acts against external electrical fields. An electrical flow, which arises from a charge accumulation inside the envelope that is isolated from the envelope, the separate charge with the opposite sign is located outside, thus also leads to an electric field in the exterior. If, on the other hand, there is an electrical connection between the charge-carrying inner areas and the shell, the electric charges are shifted to the surface and the inner area remains field-free. This principle of charge displacement is used in some high -voltage generators such as the Van-de-Graaff generator to store charge and generate high electrical voltages.

If the alternating fields are not too high-frequency, a Faraday cage can consist of a cage made of conductor bars, wires or a sheet metal with small openings instead of a closed conductor wall. The shielding attenuation is related to the mesh size, which should not exceed about 1/10 of the wavelength.

An ideal Faraday cage also shields high-frequency alternating fields because eddy currents are induced on the surface of the cage , which counteract the external field according to Lenz's rule . In this case, the shielding effect is not ideal, but is characterized by finite shielding attenuation and penetration depths into the shield.

Due to their finite conductivity, Faraday cages made of non- ferromagnetic metal shield high-frequency alternating fields when the metal layer is significantly stronger than the penetration depth of the induced currents. 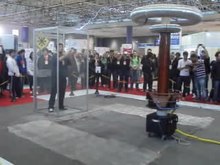 Faraday cages are often used where the effects of external electrical or electromagnetic fields can negatively affect the functionality of a device or where internal electromagnetic fields should not reach the outside. For example, it is used to shield measuring instruments, electrical lines or measuring rooms, e.g. B. in front of transmitters. The Faraday cage is then z. B. the housing made of a conductive material or a thin metallic foil with which the space to be protected is enveloped.

The Faraday cage principle is also used in lightning protection for buildings. Here it is approximated by a rough structure of lightning rods and earthed building parts.

Car occupied by people as a Faraday cage, experiment in a high-voltage hall

Cars and airplanes with a conductive shell also act like Faraday cages. Electromagnetic fields, the wavelengths of which are small compared to the electrically open joints and gaps in the body, are not efficiently shielded, however. This explains why cell phone reception is possible in the car .

The microwave oven is an example of a Faraday cage in which the inside and outside are swapped, so to speak. The metal cooking space shields the environment from the strong microwave radiation inside the oven. There is usually a resonance seal on the door , which is only effective for a very specific wavelength.

The metallic housing of a magnetron ensures that the high-energy electromagnetic field remains inside the magnetron. A small part of the field is directed to the outside through the antenna connection.

The simplified, two-dimensional design of a Faraday cage is called a corona ring and is used in the high-voltage area, for example in isolators and surge arresters (varistors). The field strength inside the ring is very low, so no loss-making field emissions can occur there, even at corners and tips such as the assembly harness .