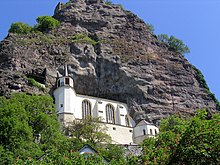 The Felsenkirche is a Protestant church in an exposed location in Idar-Oberstein in Rhineland-Palatinate and the city's landmark.

On the foundations of an older cave castle , Wirich IV von Daun-Oberstein had the Idar-Oberstein rock church built between 1482 and 1484. A rock wall and Bosselstein Castle tower above the church . Below are the houses of the Oberstein district. Due to its location and its widely visible presence, the church has become the symbol of the city of Idar-Oberstein. To enter the interior of the church, one has to go through a tunnel dug into the rock in 1980/81.

The patronage of the Felsenkirche has not been established with certainty, but documents point to St. Walburga as the namesake. From the Reformation until 1964 the Felsenkirche was the Evangelical Parish Church of Oberstein.

The exposed location repeatedly led to considerable damage from falling rocks, which in 1742 and 1858 led to far-reaching structural changes to the church. Work in the years 1927 to 1929 brought about another major change in the building fabric and the furnishings, with extensive moisture damage being removed as part of a thorough renovation. With another renovation in 1981, the interior was again fundamentally redesigned and numerous pieces of equipment were removed.

Of the remaining furnishings, the winged altar from the 14th century with the Passion of Christ should be emphasized. The work comes from the master of the Oberstein Altarpiece .

A legend has grown up around the edification:

Around the middle of the eleventh century, the brothers Wyrich and Emich von Oberstein lived at Bosselstein Castle. Both loved Bertha von Lichtenburg and, when Wyrich found out about his younger brother's engagement, he threw Emich out of the window of the castle. Marked by his grave guilt, Wyrich confessed the deed to an abbot . As atonement , he was to build a chapel with his own hands on the spot where his brother had died. When the construction was completed, Wyrich asked God for a token of forgiveness. A spring rose from the rock that still flows today. At the inauguration of the chapel, Wyrich sank dead in front of the abbot at the altar.

The church is usually open to visitors from mid-March to mid-November and is used occasionally for services, weddings and Christmas mass on Christmas Eve. Due to urgent, extensive rock securing work, however, it must remain completely closed from autumn 2018 to the end of 2020. 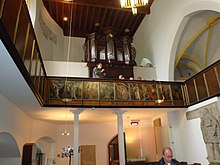 The organ was built in 2001 by the organ builder Rainer Müller (Merxheim). The organ case dates from 1756 and was built by the brothers Johann Nikolaus and Joh. Philipp Stumm from Rhaunen-Sulzbach. The layout of today's organ works is stylistically based on the organ building tradition of the Stumm family of organs. The purely mechanical instrument has 21 stops on two manuals and a pedal.