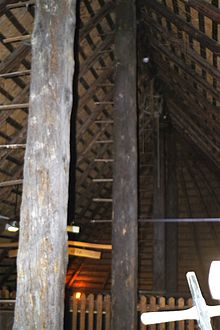 A first column also high column , in Switzerland and in Alemannic Stud , Hochstud or Firststud ; is a massive, vertical beam in a ridge pillar house , which supports the roof with the ridge beam , also known as the ridge tree. The ridge column is typical of the early Black Forest house and was mostly made from a mighty silver fir .

In the ridge pillar house, the load-bearing component is the ridge pillar; it initially went from the ground to under the roof ridge . In the course of time, two more columns were added to the ridge column, which also went through from the floor to the roof. Sleepers were not common. The ridge pillar carried the clapboard or thatched roof like an umbrella. The fixtures were installed underneath (around the cooking area). A ridge column has an average height of 13 m, sometimes up to 20 m, and a cross section of up to 50 × 50 cm. The bracing was carried out by horizontal beams, the cat belt . This type of construction was common in the cities from the 12th to the 14th centuries, and for farmhouses until the 18th century. In the beginning, mainly large central farmhouses were built in this way. Later the ridge pillar construction developed from this .