This article deals with the family Strombidae, but the sub-order of the Thecosomata (“sea butterflies”) is also referred to as “wing snails ”. 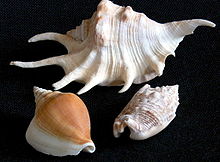 The wing snails (Strombidae) are a family of marine snails that live in tropical and subtropical areas.

The winged snails have large shells that are provided with spines and other outgrowths in many species . The family is characterized by a U-shaped indentation at the front of the elongated edge of the housing, the so-called Stromboid notch. The well-developed lens eyes sit on long feelers, from which smaller, thin feelers branch off for touching. Observed a wing screw their surroundings, the left eye looks through the Stromboid notch and the right by the Siphonalkanal that otherwise the siphon receives. The claw-shaped horny operculum is also characteristic of the pteropods , with the help of which all species can move very quickly by anchoring the same in the substrate and jerking the foot together.

Pteropods live in tropical and subtropical seas on sandy and muddy bottoms. They feed on algae and detritus . The Strombidae lay their eggs in long, gel-like ribbons that are covered with sand and stones. Planktonic Veliger larvae hatch from them .

The majority of the winged snails, around 40 species, are common in the Indo-Pacific . Here you can find representatives of the genus Lambis , the so-called spider snails , which have finger-like appendages at their housing mouth. Examples are the common spider snail ( Lambis lambis ), the scorpion wing snail ( Lambis scorpius ) and the purple spider snail ( Ophioglossolambis violacea ). The large boat hook ( Harpago chiragra ) and the dog wing snail ( Laevistrombus canarium ) also live there. There are other species of the family in the eastern Pacific and a single species on the Atlantic coast of Africa . Six species of pteropods are found in the western Atlantic and Caribbean Sea , including the great fencing snail ( Lobatus gigas ), the red fencing snail ( Strombus pugilis ) and the Florida fencing snail ( Strombus alatus ). The largest species of the family is the species Lobatus goliath , which occurs on the Atlantic coast of Brazil and has a casing length of approximately 40 cm.

The giant wing snail (great fenugreek , Strombus gigas ) from the Caribbean , whose shell can reach a length of 30 centimeters, is already endangered by excessive foraging. It is coveted as a delicacy in its raw and cooked state. The enclosures are sold to tourists as souvenirs. Lambis truncata is even bigger at 35 centimeters.

The family is currently divided into two subfamilies: