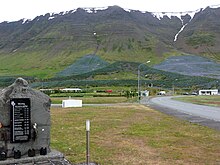 On the left the plaque for the avalanche victims, in the back the new avalanche barriers. Lupins on the sides

Flateyri is a village in the municipality of Ísafjarðarbær in the West Fjords of Iceland .

The place is located on the north bank of Önundarfjörður on a peninsula in the fjord and had 201 inhabitants on January 1, 2019. The 660 meter high mountain Eyrarfjall towers over the place.

The transport connection to Flateyri was not easy in winter in earlier times. It then took place mainly by sea, the pass of the Breiðadalsheiði towards Ísafjörður was considered difficult to drive at this time of the year.

However, since 1996 Flateyri has been connected to the northern city of Ísafjörður, which is now also part of the same municipality, through the 9 km long Vestfjarðagöng tunnel , the longest tunnel in Iceland. To the south, the Flateyrarvegur

over the pass of the Gemlufallsheiði .

The name Flateyri means flat sandbar and refers to the same on which the village was built. Numerous places in the Westfjords of Iceland have eyri in their name and were built on sandbanks below the often very steep mountain walls in the fjords. also Hesteyri , Þingeyri , Hrafnseyri etc.

The sandbar on which Flateyri lies consists of boulder clay and moraine remnants from the Ice Age glaciers and was then eroded and further shaped by the sea.

It wasn't until about 100 years later that a real village was formed. This was done in connection with fishing, especially shark fishing . As in other places on Iceland's north and west coast, people went out in rowboats and small sailboats to catch the Greenland Shark, which is still considered a special delicacy in Iceland today. Around 1900 there were around 200 people in Flateyri.

Around the same time, more precisely in 1889, the Norwegian Hans Ellefsen founded a station for whaling and processing in Flateyri . However, this factory burned down in 1901 and the company was then relocated to the East Fjords of Iceland.

In 1912 a German company started processing fish on the former Ellefsen site. This was later adopted by Icelanders.

The house of the Norwegian H. Ellefsen

At that time Ellefsen sold his large house to Hannes Hafstein , Iceland's first internal head of government, at the time still under Danish rule. Hannes Hafstein had the house torn down, transported to Reykjavík and rebuilt in Tjarnargata in Reykjavík's city center. It is still there today and is used by the respective Icelandic government under the name Ráðherrabústað for meetings of the Council of Ministers etc.

The winter of 1995 turned out to be particularly snowy. This has resulted in some serious avalanche accidents in Iceland. On October 26, 1995, a large avalanche broke out from Eyrarfjall above Flateyri. 45 people were buried under her, 25 of whom were rescued in difficult circumstances, but 20 died. Numerous houses were destroyed. A 2010 documentary by Einar Þór Gunnlaugsson about the events and the rescue operation also mentions that because of the difficult weather conditions and transport links - there was no connection to Ísafjörður through a tunnel yet - the people in Flateyri initially left for 5 hours on themselves were.

Avalanche barriers are now supposed to divert further avalanches from the village. There is a viewing platform on top of the barriers.

The port was gradually expanded and the people of Flateyri still live mainly from fishing. Since this has become less and less profitable, quite a few commute through the tunnel to Ísafjörður to work.

In Flateyri there is a kindergarten and a comprehensive school as well as medical care, gas station, restaurant, guest house and sports facilities with a swimming pool.

The local church was consecrated in 1936 and is made of concrete. The stained glass windows by Leifur Breiðfjörð are remarkable . The main altar painting is by Brynjólfur Þórðarson.

Sons and daughters of the village