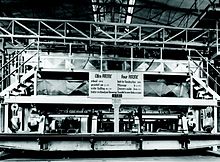 Float glass is flat glass that is manufactured in the float process , or float glass process , an endlessly continuous process in which the liquid glass melt is continuously fed from one side onto a bath of liquid tin. On this floats (Engl. To float ) glass. The process has been used industrially since the 1960s, has since largely replaced most of the other methods of flat glass production and now supplies around 95 percent of all flat glass in all areas of application such as window glass, car windows and mirrors .

According to DIN 1249 (flat glass in construction) and DIN 1259 (glass), the term mirror glass stands for flat and transparent glass , but is now often used synonymously for float glass; as a basis for flat glass almost all sectors is also based glass spoken.

Float glass production is an endless, continuous process in a continuous furnace . The pure, refined glass melt , which is doughy and liquid at 1100 ° C , is continuously directed from one side to an elongated bath of liquid tin , on which the approximately two-thirds lighter glass floats and spreads out evenly like a film. The surface tension of the tin and the liquid glass creates very smooth surfaces. The glass, which has solidified on the cooler end of the bath and is still around 600 ° C, is continuously pulled out and passes through a cooling furnace , in which it is cooled down without tension. After an optical quality control, the glass is cut (standard size in Europe: 6000 mm × 3210 mm).

The viscosity of the semi-liquid glass and the pulling speed at which the solid glass is pulled by the semi-liquid phase determines the strength (thickness) of the glass. In many systems, so-called top rollers are placed on the edge of the glass surface (which will be cut off later) in order to regulate the glass thickness in the area of ​​the tin bath. Top rollers are no longer used to produce thicker glass. In this case, the viscous glass is pulled through between graphite blocks , the so-called fenders, and unfolded to a greater thickness. The float glass process enables glass thicknesses from around 0.4 mm. Usually the worldwide standard thicknesses of 2, 3, 4, 5, 6, 8, 10, 12, 15, 19 and 24 mm are produced.

A float glass plant is very long (approx. 300 to 800 m) because of the relatively high tonnages on average and the large units that are therefore large. Tin has a low melting point of 232 ° C , so that it remains liquid until the glass has completely solidified; In addition, at the 1100 ° C used, it does not yet have a high vapor pressure that could lead to unevenness on the underside of the glass, and it is almost inert towards the glass . The tin must be kept in a protective atmosphere (mostly nitrogen and hydrogen ) to avoid oxidation with the oxygen in the air . 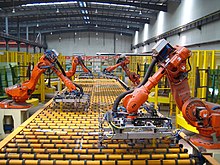 Cut float glass, which is automatically removed from the line and stacked in the cold area

On the tin melt the glass side is small with tin doped . Under certain circumstances, float glass cannot be used for scientific investigations in laboratory glassware, which require particular purity. The subsequent coating processes also work differently on both sides. Identifying the underside based on the traces of tin is therefore sometimes important for further processing. The fact that the tin side fluoresces gray-blue under short-wave ultraviolet radiation is often used to differentiate .

A float glass plant runs continuously around the clock and produces for around 11 to 15 years ( furnace travel ). After that, a cold repair is required, in which the tub lining is renewed. A larger system delivers around 3000 m² / h with 4 mm glass thickness or 33 t / h. In 2006 around 280 float glass systems were in use worldwide, and the trend is increasing.

Float glass has so far been delivered without permanent product labeling. Two methods are known to apply or introduce such a marking:

Other labeling methods with printing are less permanent; Marking processes with silver vapor deposition are no longer in use. 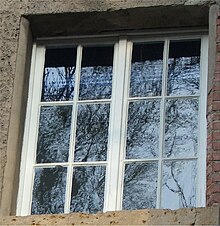 Compared to older glass: a float glass pane is mounted in the upper left of the window; the difference can be clearly seen in the quality of the reflection from the tree

As early as the middle of the 19th century, Henry Bessemer had the idea of ​​using liquid tin as a carrier for flat glass. In 1902, William E. Heal received a patent in the USA for the manufacturing principle of running glass continuously over a tin bath and thus obtaining plane-parallel surfaces . This patent has never been used commercially.

Alastair Pilkington developed the process to the point that it was industrially applicable and presented it to the public on January 20, 1959. In 1966, the Pilkington Brothers company in St. Helens (Great Britain) began production and subsequently issued a large number of licenses to other flat glass manufacturers.

The first industrial process was only suitable for the production of 6.1 mm thick glass, the glass thickness that results when liquid glass is spread out on a float bath filled with liquid tin. So-called edge rolling machines were used in the development of the float process, the further development of which led to the top rolling machines that are common today. It was this development that gave the float bath process its current importance, as the process could now be used to produce different glass thicknesses.
The new process almost completely replaced the previous flat glass production using cast or blown processes. Most of the flat glass in the world was soon coming from float glass plants. Transparent flat glass has since become significantly cheaper and today it is a versatile building material that is used extensively in architecture, which gives architects a great deal of design freedom and enables energy-saving constructions with high transparency. However, since the small remaining traces of tin on one side of the float glass stand in the way of some special applications, z. B. for LCD / TFT displays the overflow-down-draw or fusion process can be given a certain importance.