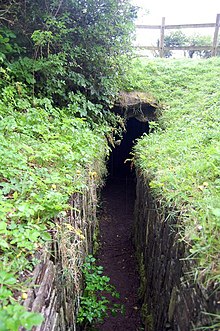 The Halliggye Fogou is an Iron Age basement on the Trelowarren Estate on the Peninsula The Lizard in the south of Cornwall , 6.4 kilometers southeast of Helston in England .

Like other basements - called Fogou in Cornwall and Wales , found in the British Isles including Ireland and in other countries - it is an Iron Age system of underground passages, chambers and niches. Halligye is one of the longest and best preserved Fogous. In the case of basements, a basic distinction is made between "rock-cut", "earth-cut", "stone built" and "mixed" basements.

In Halligye there are two stone built corridors about two meters high, one of them about 20.0 meters long and straight, the other 28 meters long and banana-shaped and provided with a lateral end chamber, together roughly in the shape of a “T” ". The Fogou was originally located under a building that has long since disappeared. The walls are partly made of megaliths and stone slabs , the three portals and the ceiling . Today's entrance at the south end of the main corridor is modern.

The Fogou is closed between October 1st and May 31st to avoid disturbing the hibernation of bats .