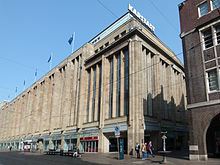 Karstadt is the largest department store in Bremen . It has its location on the upper street corner Sögestraße in the old town in the district center .

From 1930 to 1932 the new building was built on the corner of Obernstrasse and Sögestrasse. The architects were the Bremen office Heinrich Wilhelm Behrens and Friedrich Neumark . The building was created after consultation with the Karstadt construction department under Philipp Schaefer. It was bombed out in World War II in 1944 and completely rebuilt by 1952. In 1965 a major renovation took place with the closure of the atrium and the installation of the four-flight escalators . The building has been a listed building since 2010 .

An extension to the neighboring building took place in 1971: When the Horten department store came to Bremen, Karstadt was able to acquire the adjacent DeFaKa department store at Obernstrasse 27-33. The facade of this house is clad with brown metal elements.

After the expansion, Karstadt in Bremen was the largest department store in Northern Germany and the fourth largest department store in Germany in terms of product range. The building at Obernstrasse 5–33 has around 30,000 m² of retail space on seven floors. There is an extensive range of groceries in the basement. In the 1980s, Karstadt took part in the redesign of the Große Hundestrasse into the Lloyd Passage .

After the loosening of the shop closing law in Germany since 1996, the opening times have been repeatedly adjusted over the years, taking into account both the shopping behavior of customers and the interests of employees. The current opening times are Monday through Saturday from 9:30 a.m. to 8:00 p.m. Up to 150 employees work in the Karstadt branch in Bremen during peak times.

Karstadt has been a member of the Bremen partnership for the environment since May 2003.

In February 2014 it became known that the building had been sold to the Bremen construction company Zech .