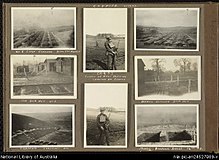 Page from a private war photo album (around 1916. Australia)

Cover of a photo album around 1900

A photo album (short for photography album ) is a book for collecting, organizing and storing photographs made of paper. The domain of the photo album is the private area, where photo albums typically describe vacations, celebrations and everyday life. In addition, the medium is also used by artists ( photo models , actors ) for application purposes. Since there have been opportunities to digitize pictures cheaply and print them out in good quality, mixed forms of classic albums with pasted digital photos up to completely digitally created albums made of paper or on the Internet have spread.

Photo albums came into fashion as early as the 1860s. At the end of the 19th century, when amateur photography did not yet exist in its present form, “photography albums” consisted of the

“Connection of pressed, punched out cardboard boxes (coulisses) with cardboard glued in between, which made it possible to take photographs. A number of these strong leaves produced in this way were combined into a beech tree, trimmed, gilded and placed in strong, mostly richly decorated leather covers, which were held together by a flap lock. "

The pictures in such “family albums” came almost exclusively from professional photographers. The paper prints were glued to cardboard cards with given dimensions, which could then be inserted into the corresponding compartments of the album. The back of these cards showed a more or less artistically designed business card of the photographer.

The albums were usually very lavishly designed, with leather or velvet covers, often with ornate metal fittings, and the pages for inserting the pictures with gold printing. There were also albums with a built-in music box that started going when opened.

Today's photo album consists of a cover, usually leather or plastic , as well as insert sheets or plastic pockets that are used to take the pictures. The individual pages are made of light cardboard on which the photos are attached using photo corners or simply glued on. Since the end of the 20th century, acid-free photo cardboard has established itself as the paper standard for photo albums. There is usually a page of spider paper between two pages .

Aside from the traditional photo album with neatly inserted pictures and texts, there are also scrapbooks with the freer forms of the diary and poetry album . Here photos are glued into the structure of handwritten text, newspaper clippings, admission tickets, etc. and give the photo album a collage-like appearance.

Since the price drop in the recycling chain for digital photographs since around 2000, the classic photo album has received a new boost in digital form. This ranges from the completely digitally created photo album, which is then put on paper, often also called "photo book", to the picture show on the PC or on the Internet.

Digital photo albums are managed by an image database and can be viewed on the PC. Stored on a digital data carrier (such as DVD ), they can be archived or passed on for a long time. Digital images contain additional information that may be relevant to a photo album, such as information about the location; The subsequent enrichment of so-called metadata according to the IPTC-IIM standard are advantages of the digital photo album. Common PCs and smartphones offer the possibility of playing digital photographs, also with music, as a slide show ( picture show programs ). "Digital photo album" (DPA) is also the term for devices for viewing digital images in picture frames. These picture viewers usually have a 7-8 "LCD screen and are powered by a rechargeable battery so that they can also be used on the go.

When a digital photo album is created on the Internet , a distinction is made between two different forms:

Since social networks became widespread, millions of people upload photos to these networks every day and create photo albums there that can be viewed by other users. These photo albums are often interactive, that is, viewers can comment on individual photos or mark image sections.