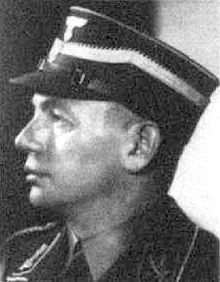 Franz Bauer was born in 1894 as the illegitimate child of the wheelwright Franz Thron and Hedwig Bauer. After attending primary school, Bauer learned the shoemaking trade. After joining the Imperial Army in 1912, he took part in the First World War from 1914 to 1918 , during which he was deployed in France and Russia and achieved the rank of sergeant.

After his return from the war, Bauer joined a volunteer corps . He then worked from 1919 to 1922 as a police officer with the security police in Marienwerder. In 1920 he married Emmi Hinze († 1944 in an air raid), the daughter of a farmer and innkeeper. From 1924 he made his living as a metalworker at the Hoesch works in Dortmund , then as a self-employed shoemaker.

On January 1, 1926, Bauer joined the National Socialist German Workers' Party (NSDAP). He also became a member of the Sturmabteilung (SA), the party army of the NSDAP. In 1930 he took over the post of full-time SA leader. Bauer was the leading representative of the SA in Dortmund. As such, he tried in vain until 1933 to conquer the industrial city, which was regarded as a "red stronghold", for National Socialism. For example, on October 16, 1932, he organized an SA deployment in the north of Dortmund, which culminated in fierce street fighting. This "Dortmund Bloody Sunday" resulted in two deaths and numerous seriously injured people. After the National Socialists came to power , he was promoted to SA Brigade Leader. The Dortmund SA Brigade 67 was subordinate to him. From March 1936 to May 1945, Bauer was a member of the National Socialist Reichstag as a member of constituency 18 (South Westphalia).

From 1939 to 1942 Bauer took part in World War II . From October to December 1942 he was trained at the police headquarters in Munich. On April 1, 1943, he was appointed provisional police president of the Wesermünde community . From April 1944 he held the same office in Duisburg before he was deposed by the Allies in April 1945.

Until 1954, Bauer lived under a false name. In the last years of his life he worked as a driver.