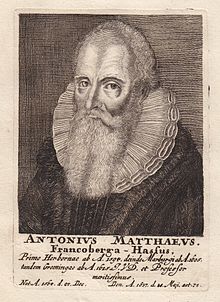 Portrait of Anton Matthäus I

Matthäus was born as the fourth son of Marburg professor Konrad Matthaeus (1519–1580) and his second wife Ursula, the daughter of Marburg councilor Geilo Wernher. His parents had fled to Falkenberg when he was born because the plague had broken out in Marburg. After attending the pedagogy in Marburg from 1581, he moved to the University of Marburg in 1585 and, like his father, began studying law. He received, among others, Hermann Vultejus and Regner Sixtin (1543-1617) the initial knowledge of law. In 1586 he moved to the University of Heidelberg , where he continued his studies with his brother-in-law Valentin Forster .

Since student unrest broke out in Heidelberg, he moved to the University of Helmstedt in 1587 and from there to the University of Wittenberg , where Eberhard von Weyhe and Petrus Wesenbeck were his teachers. After the student riots, his brother-in-law Georg Sohn (1551–1589) directed him back to Heidelberg, where a position as court master awaited him with the noble Alexander von Somber, whom he accompanied on an educational trip. So he met Hugo Donellus and Hubert Giphanius (1534–1604) at the University of Altdorf . In 1593 he returned to Marburg and became a private teacher of law, in 1594 he received his doctorate in law and in the same year he was appointed to the legal chair of the academic high school in Herborn .

At that time he also began to work as a writer. In 1605, Landgrave Moritz von Hessen appointed him to the Marburg University as a full professor of law. After 20 years on the chair, he became Professor of Law at the newly founded University of Groningen in 1625 . He would also have liked to take up a position at Franeker University , but was not available in Groningen. So he spent the last years of his life there. In old age he had to struggle with increasing body aches and was more and more confined to bed.

A large number of his writings contain the Collegia juris sex, published after his death by his sons, which were put on the index in Rome in 1649. These include 144 disputations.