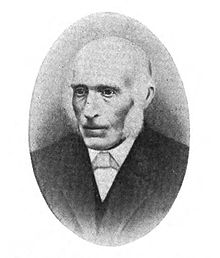 Friedrich Schmid towards the end of his life

Friedrich Schmid was the son of Friedrich and Anna Schmid, b. Pfeiffle. In March 1828 Schmid entered the pietistic Basel mission house and, after five years of training, received his ordination as a preacher in Lörrach on April 8, 1833 . At that time, the directorate of the Basel Mission had received a request from Ann Arbor in the US state of Michigan and decided to send Friedrich Schmidt there. On June 8, 1833, Schmid embarked for the United States from Le Havre and arrived in Detroit in August of that year . From there he went on foot to Ann Arbor, where he held the first German service on August 26, 1833. By December 1833 a first Lutheran chapel was built under his direction about three miles west of Ann Arbor in the village of Scio, which was named Zion Church.

In 1845, under his leadership, construction began on a church in Ann Arbor itself, which was completed in 1849. This church was named Bethlehem Church. Lutheran congregations and churches also emerged in other places in Washtenaw County under Schmid's leadership, and in numerous other places in Michigan, including Monroe , Ypsilanti , Plymouth , Lansing , Grand Rapids , Saginaw, and Sebewaing . After 38 years of activity, Friedrich Schmid had to resign from his post as pastor in 1871 for health reasons.

The First Meeting House (i.e., Chapel) of the Germans in Michigan from 1833, taken in 1881. Made available by Washtenaw County Historical Society.

Friedrich Schmid married the German immigrant Louise Mann in Michigan on September 4, 1834. The couple had six sons and six daughters. Louise Schmid died on March 10, 1899. A son of the Schmids, also called Friedrich Schmid, published a short life story of his father in Detroit in 1908 (in German).