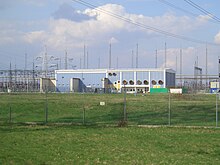 Former converter hall. On the left side of the building are the bays for the converter transformers.

Parked system parts of the GK on the premises

This system, built by Siemens , had a maximum transmission capacity of 600  MW with an operating voltage of 142  kV and its technology was largely identical to the HVDC close coupling also built by Siemens in Etzenricht . As with the Etzenricht HVDC close coupling, 864 thyristors were used. However , instead of six single-phase transformers as in Etzenricht , four three-phase transformers were used as in Dürnrohr . In contrast to the latter, the HVDC Vienna-Südost was not immediately dispensable in 1995 after the synchronized connection of the Eastern and Western European power grids, because the lack of a nationwide 380 kV grid in Austria would have caused control problems if the grids had been connected directly at the time .

These problems were only overcome in 1996 with the commissioning of frequency control devices in the southern Polish coal-fired power plants, so that GK Wien-Südost only became dispensable one year later in October 1996 and could be shut down.

With the elimination of the HVDC close coupling, the maximum transmission capacity of the 380 kV Vienna-Southeast-Győr line increased to 1,514 MW.

Like the plant in Etzenricht, it was to be dismantled and installed at a location in Eastern Europe near the border with the CIS countries . However, this was not implemented and so the plant was dismantled and disposed of in 2007/2008. A harmonic filter was retained as a souvenir. In place of the GK Wien-Südost, a new building is being built for Austria's main load distributor. However, the converter hall was not demolished, but converted into a workshop hall.

The second mast of the 380 kV line to Győr since the closure of the GK can be illuminated at night and can be seen from afar on Vienna's outer ring road S1 . From the third (before the closure of the Vienna-Southeast GK, the second mast), which is located 260 meters south of the facility, the line to Győr is open for a length of 26 kilometers together with the two circuits of the 380 kV lines leading to the Sarasdorf substation laid the same mast. The line passes the Sarasdorf substation approx. 50 meters south. After a further 37.5 kilometers, the line crosses the Hungarian border. At the beginning of 2010 a second 380 kV circuit was installed, for which the masts were already designed. At Ötteveny, this circuit branches off the line route to Győr in a south-westerly direction and ends in the Szombathely substation .