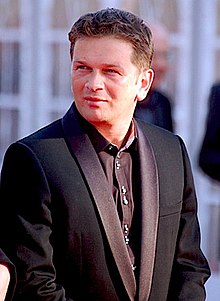 Gaël Morel (born September 25, 1972 in Villefranche-sur-Saône ) is a French actor and director .

Morel was born in 1972 in Villefranche-sur-Saône , a small town with 30,000 inhabitants 25 km north of Lyon . He grew up in the nearby village of Lacenas.

At the age of 15, Morel left home to study film in Lyon. Eventually he moved to Paris, where he met the successful French director André Téchiné in 1994 , who promptly hired him for the lead role in his film Wilde Hearts ( Les Roseaux sauvages ), which was later awarded a César . Morel himself achieved the breakthrough. Not only did many critics praise him for his performance, he was also nominated for a César as the most promising young actor.

In contrast to his other acting colleagues from Wilde Herzen , Frédéric Gorny , Élodie Bouchez and Stéphane Rideau , for whom the film began a successful acting career, Morel decided to pursue a career behind the camera, as this had always been his real passion. As a director, he regularly brought his former acting partner Stéphane Rideau in front of the camera for his projects.