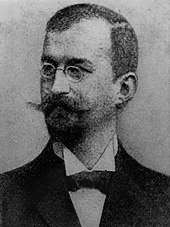 Extra sheet on the occupation of the town hall in Köpenick on October 16, 1906

Georg Langerhans, the youngest son of the Imperial Court Counselor Wilhelm Langerhans , attended the Royal High School in Leipzig from 1880 to 1889 , studied law and obtained a doctorate in law.

On May 31, 1902, Georg Langerhans competed in the tender to a salaried position in the city council at that time Cöpenick. On September 5, 1902 he was elected by the Cöpenick city council for a term of 12 years to the city council of Cöpenick. As early as May 1903, he became an assistant to the First Mayor Gustav Borgmann . After Borgmann's resignation for health reasons, Langerhans was elected First Mayor of Cöpenick on February 23, 1904 . The inauguration took place on October 24, 1904. During his tenure, the Köpenick road network was expanded and an efficient electricity, sewerage and water supply system was created.

Langerhans became world-famous when he and his city secretary were arrested on October 16, 1906 by the shoemaker Wilhelm Voigt, the so-called captain of Köpenick , in the town hall for alleged accounting fraud and then taken to the Neue Wache in Berlin, while the fake captain was the Köpenick city treasury confiscated. Out of shame about his inglorious role in the process, Langerhans resigned on October 19, 1906, but resumed his official duties on October 24, 1906 at the request of the magistrate .

During the First World War , Langerhans was called up as first lieutenant of the infantry for one year on June 9, 1915 for military service and deployed as the “Imperial Mayor” of the city of Łomża in Russian Poland , which was then occupied by the Germans . During his service the Cöpenick city council elected him on July 2, 1915 in absentia with 100 percent of the votes again for 12 years as First Mayor. In the summer of 1917 Langerhans fell ill with severe pleurisy , from which he then died in the Stubenrauch hospital in Groß-Lichterfelde. The grave of honor of Langerhans and his wife Käthe is located in the cemetery of the Laurentius community in Köpenick .

A street in the Berlin district of Köpenick is named after Georg Langerhans.