The König-Albert-Gymnasium was a state-run humanistic gymnasium for boys north of downtown Leipzig .

On an initiative of the city council dating back to 1872, the Kingdom of Saxony built a grammar school, which was the third in the city. The opening took place in 1880. The institution was initially called the Royal High School .

The building was located at Parthenstrasse 1, at the corner of Pfaffendorfer Strasse, i.e. directly opposite the entrance to the zoological garden . It was a three-story building with a clearly protruding middle section, which was raised compared to the neighboring sections and contained the auditorium on the second floor. The main front comprised 21 window axes with two side projections . There were specialist rooms for biology, chemistry, physics and music as well as two gyms.

With a view to the emerging Queen Carola High School , the school was named after the reigning monarch in 1900 and was henceforth called the King Albert High School . Many of the school's teachers worked alongside or later at the University of Leipzig as consultants, lecturers and professors. The good reputation of the school meant that the number of students rose quickly to around 600.

In the bombing of December 4, 1943 , the building was totally destroyed. After the rubble had been removed, the area was used as a parking lot, especially for the Leipzig Zoo, until the latter had its parking garage built here in 2004. After the bombing, lessons were temporarily continued in alternative quarters until the grammar school was closed in 1947 and the remaining classes were transferred to the "Karl Marx School". 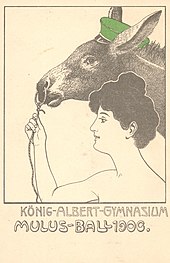 At the beginning of 1990, during the fall of the Wall , a group of Christian teachers was formed from the congregations of Leipzig and the surrounding area, with the aim of founding a Christian school. He also received approval from the Ministry of Culture in Saxony to found a state-sponsored ecumenical school. In July 1991 the school was assigned the school building Czermaks Garten 8 in Leipzig - a panel building school - and on August 26, 1991 the "König-Albert-Gymnasium under construction" with 285 students and 20 teachers started operations as a Christian / humanistic school . The school grew to over 500 students with 33 teachers. When the high schools in Leipzig were due to close in 1996, the König-Albert-Schule also came into focus and was finally closed in 1998 in response to protests from students, teachers and parents. The prefabricated building is currently used as an evening high school.

In 1991 the Federation of Albertiner eV was founded in Leipzig, initially with the aim of having an annual school meeting of the former students of the König-Albert-Gymnasium now also take place in Leipzig after it had taken place every two years in Bad Hersfeld before the fall of the Wall . After the approval of the new König-Albert-Gymnasium, the reconstruction of the destroyed school building was on the agenda, but had to be abandoned after it was closed. In 2002 a foundation for the König-Albert-Gymnasium Leipzig was established, the administration of which is now also the responsibility of the association. This foundation annually awards prizes for outstanding achievements in the context of humanistic high school education in the fields of ancient languages ​​(especially Latin), history and philosophy / religion / ethics. All pupils in grades 10 to 12 from the grammar schools in the area of ​​responsibility of the Saxon Education Agency , Leipzig Regional Office, are eligible to participate .