The George Washington class was the first class of nuclear-powered ballistic missile submarines (SSBN) in service in the United States Navy and worldwide. The five boats built remained in service from 1959 to the mid-1980s.

Theodore Roosevelt on the launch

The planning for the first submarine-launched ballistic missile (SLBM for short, ballistic missiles to be launched by submarines) and a launch platform for the same began in the US Navy at the end of 1955 when a Special Projects Office was founded for this purpose. The then Chief of Naval Operations Arleigh Burke put Admiral William F. Raborn in charge of it.

After the completion of the first operational SLBM, the corresponding platform had to be put into service quickly. On December 31, 1957, the first two boats in the class were approved. In order to speed up the construction, the Navy was instructed to use the money and material resources of two hunting submarines of the Skipjack class, which are currently under construction . The lead ship of the class, the USS George Washington (SSBN-598) had actually already been laid down as a hunting submarine and was to receive the name and number of the later sunk USS Scorpion (SSN-589) . In January, the keel was welded apart again to insert the missile section. The official date for laying the keel (November 1, 1957) is before the date of the official approval of the boat. During the preparatory work for the second unit of the class, material was used that was originally planned for a skipjack , namely the USS Sculpin (SSN-590) . Ultimately, three of the boats were financed over fiscal year 58, which was only possible through an addendum to the Navy's construction budget approved by US President Dwight D. Eisenhower in February . Construction of the remaining two boats was completed through fiscal year 59, which began October 1, 1958. By November 1958, all five boats in the class were under construction.

Two units were built by Electric Boat , the others at Mare Island Naval Shipyard , Portsmouth Naval Shipyard and Newport News Shipbuilding . The units each spent around one and a half years in dry dock, followed by final equipment that took at least six months each so that the boats could be put into service a little over two years after the keel was laid. The first boat of the class entered service in late 1959, and in March 1961 all five units were active.

The boats were named after great statesmen in United States history . The lead ship SSBN-598 was named after George Washington , the first President of the United States. SSBN-599 was named after Patrick Henry , a prominent figure in the American independence movement . SSBN-600 again bore the name of a President, namely Theodore Roosevelt ; also SSBN-602 , which was named after Abraham Lincoln . SSBN-601 honors Robert E. Lee , the most successful general in the Confederate States Army .

The boats were the first dedicated missile submarines for the US Navy. At about the same time, the Soviet Navy put the first Gulf-class units into service, which also carried ballistic missiles but were conventionally propelled. With SSBN , the Soviets could come up with the hotel class from 1960 . The US Navy put the first boat of the successor class Ethan Allen into service in August 1961 , which also received five boats by 1963, but no longer consisted of modified hunting submarine designs. By 1967, 31 Lafayette-class boats (including the James Madison and Benjamin Franklin sub-classes ) were added. These 41 missile submarines made up the so-called 41 for Freedom , the fleet of submarines that carried the US deterrent to the oceans.

The Ohio class boats were put into service around 1980 . The restrictions of the SALT-I regulations did not allow an expansion of the strategic submarine fleet. Therefore, two boats, whose core cargo would otherwise have had to be replaced at great expense, were taken out of service. The rocket launch system was deactivated on the other three boats whose reactors still had nuclear fuel; some of them continued to operate as hunting submarines until 1985, and most of them took part in submarine exercises.

After their departure, all boats in the Ship-Submarine Recycling Program at the Puget Sound Naval Shipyard were abandoned.

At Patrick Henry clearly visible: The hump, which houses the missile bays.

The George Washington class boats were around 116 meters long and 10.1 meters wide. The draft was 8.8 meters. The boats displaced approx. 6800 ts submerged . The hull essentially consisted of the bow and stern of a skipjack boat; However, a 40-meter-long section was added here directly behind the tower , in which the launch tubes for the rockets, an auxiliary engine room and space for three inertial navigation systems were located.

Otherwise, the boats were divided up similarly to hunting submarines. In front of and under the tower were the torpedo, crew and command rooms, behind it was the rocket silo room - also known as the “Sherwood Forest” because of the log-like launch shafts -, then the reactor chamber and finally the engine room.

The drive of Washington consisted of a pressurized water reactor type S5W . The S stands for the use on a certain type of ship, here submarine , submarine, the 5 stands for the generation, the W represents the manufacturer, with this type the Westinghouse Electric Corporation . This reactor delivered around 15,000 horsepower that acted on a shaft. The maximum submerged speed was 20 knots or less, a few knots slower than hunting submarines. However, a quiet drive system counted more than speed for the SSBN, as their main concern was clandestine patrol driving. The shape of the hull was optimized for underwater travel, which is why the boats only surfaced to approach their base and after leaving the harbor, as soon as the water depth allowed this. The theoretical maximum speed was around 15 knots. 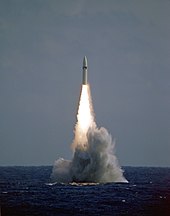 The main armament of the boats consisted of sixteen ballistic missiles housed in launch shafts ; the submarines could launch their entire load of ICBMs within 15 minutes. At the beginning of their careers, the boats wore UGM-27 Polaris A1 SLBMs . These had a range of just 1000 nautical miles. On July 20, 1960, the type ship shot down one of these for the first time and then sent the message to President Dwight D. Eisenhower among others: This read: GEORGE WASHINGTON SENDS POLARIS FROM OUT OF THE DEEP TO TARGET. PERFECT.By 1965, all five boats had been converted to the more modern Polaris A3 , which had a range of 2500 nautical miles would have. This conversion, together with an overhaul and refilling of the reactor with nuclear fuel , cost an average of 22 million euros per ship. The boats of the class carried this rocket until the end of their service life. A further upgrade, for example to the UGM-73 Poseidon , was no longer possible due to the increased size of this more modern rocket.

For self-defense, each of the boats had six torpedo tubes with a diameter of 53.3 cm. This meant that all types of anti-submarine torpedoes could be carried and shot down, including the large Mark 48 heavyweight torpedo after its introduction .

Like the hull, the location electronics were also taken from the Skipjack hunting submarines. In the bow was the sonar system BQS-4 , which could be used both actively and passively to track down enemy submarines. So-called BQR-7 lateral sensors , which were used passively to determine the bearing of targets , also ran along the hull. A short-range active sonar of the type BQR-19 was used for navigation . To determine the position, which was fed in addition to the use for navigation as shooting data to the missile, there was on board three inertial navigation systems of the type SINS Mk. 2, . 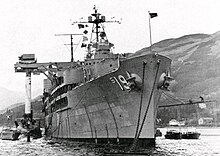 Loading a Polaris from the USS Proteus onto the Patrick Henry , Holy Loch 1961

The first patrol for nuclear deterrence began the George Washington in late 1960. Such a patrol ran according to a firmly planned scheme. After leaving port, the submarine submerged and remained under water for around three months. During this time, the boat was in a top-secret patrol area, waiting for orders to fire its ballistic missiles at enemy targets. After the mission, the boat returned to its port, underwent a short maintenance and bunker period, then embarked a second crew and cast off for the next patrol. For this purpose, each boat had two full crews - referred to as the Blue Crew and Gold Crew - who took turns manning the boat.

Since the Polaris missiles had no global range and the patrol areas therefore had to be very close to the hostile mainland, the SSBNs of the George Washington class were basically forward deployed , i.e. were deployed from upstream bases and only returned to the US during shipyard periods. Coast back. Such forward bases were Holy Loch in the Atlantic , Scotland and Rota in Spain, and Apra Harbor , Guam and Pearl Harbor , Hawaii in the Pacific .

Submarines of the George Washington class