The German Colony in Jerusalem ( Hebrew המושבה הגרמנית haMoshava haGermanit ) is a district created by members of the temple society in the 19th century. Today, the German Colony is a popular quarter for Jerusalemites and tourists alike, with cafes, small shops and restaurants.

The temple is a company from the Württemberg pietism originating Free Church that the end times would expect in Palestine. After the establishment of settlements in Haifa and Jaffa from 1868, the Templars acquired a piece of land near the old city of Jerusalem from the Greek Orthodox Patriarchate in 1873 . They identified this location with the valley Refaim ( Emeķ Refa'im ) mentioned in the Old Testament . In contrast to the other Templar colonies , the settlement Emeķ Refa 'had a more urban character, even if the house owners each cultivated a garden plot. The individual rectangular parcels (mostly 1 dunam ) were surrounded by a fence or a wall with a wrought iron gate. “In 1878 the leadership of the temple society and the seat of the temple monastery, a training center for young Templars, were moved from Jaffa to Jerusalem. This drew many Templar families to Jerusalem so that a colony could be established. "

Laying out in the typical style of a German street village, Emeķ Refa'im caught the eye because the street was lined with trees on both sides. Green-painted shutters and iron grilles as well as red tile roofs completed the European appearance. The buildings were made of Jerusalem stone . There were plain public buildings: the community hall and two schools.

The residents worked as craftsmen (bakers, shoemakers, etc.), but also as doctors, architects, teachers and lawyers. With the construction of the Jaffa – Jerusalem railway line , which passed close to the colony (1892), Emeķ Refa'im was incorporated into the Jerusalem New Town and (unlike Mea Shearim ) lost its character as a religious settlement.

When Kaiser Wilhelm II visited Jerusalem in 1898, he was enthusiastically received in the Templar colony. In the Templars' cemetery there is a memorial for 24 Templars who died as German soldiers in the First World War. After the British conquest of Palestine, the majority of the Templars were interned in Egypt, but returned a few years later. Before the Second World War, many Templars sympathized with National Socialism . The British Mandate Government deported the Templars who lived here to Australia during World War II. A last group of elderly and frail people remained in the Borromean hospice until the end of the war . Some of them were expelled from the State of Israel as members of the NSDAP in 1949 , the rest left Israel the following year.

The meeting room was built on the edge of the colony closest to Jerusalem's Temple Mount . The Turkish governor of Jerusalem was present at the inauguration in 1882. The entrance on the long side is highlighted by a decorative gable; a roof turret serves as a bell tower. The Templars gathered here for the Sunday service with sermons and congregational singing accompanied by an organ. Municipal assemblies were also held here. Today the building is used by the Armenian Orthodox Church .

During the mandate there were two schools in Jerusalem that qualified for attending the German upper level: the Propsteischule (German Evangelical School) and the Templars-run Lyceum Tempelstift, built in 1882. Both were dependent on government funding from Germany, but pursued different ones Concepts: the provost school corresponded roughly to a Prussian reform high school, the temple monastery to a Württemberg high school. The German authorities advocated the unification of both schools as early as the Weimar Republic . This was forced in 1936/37 under the sign of Nazi ideology. The British Mandate Government closed the school at the beginning of World War II; the building, in the neighborhood of the community hall, then served various purposes.

The houses were mostly intended for a family and combined Arab and European elements. In the Arab tradition, the walls were built (two-shell masonry with rubble filled in between). The main entrance, often designed as a portal, opened to a wide main corridor that opened up the rooms on both sides. The kitchen was in the back of the house, the sanitary facilities in the yard. The low cellar, which was used to store tools, food and wine, was entered through an external staircase. There was often a room here for an Arab servant. Many houses had a cistern in the basement. The houses had gable roofs that were covered with red clapboards. There were balconies, painted shutters, and Bible verses over the entrance of the more intricate houses. ( According to Simon Goldhill , the red tile roofs of the German Colony were taken over by Zionists and, as a deliberate contrast to Arab architecture, were color-coded as a sign of Jewish settlements in the occupied territories.) 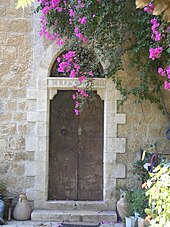 This house was built before the colony was founded and differs from the other houses in that it has two floors. Matthäus Frank owned a vineyard, two cisterns, a steam-powered mill and a bakery on the large property that belonged to it; a special attraction was a private swimming pool on Frank's property. Over the portal Frank put the year 1873 and the words Eben Ezer , with which he referred to the Bible verse 1 Sam 7,12  LUT .

This house is highlighted by a stone lion's head above the entrance, a motif used by the pharmacy chain that the Sandel family ran in southern Germany. As an architect, Theodor Sandel was involved in various large building projects in the Jerusalem of his time, including the Dormition Abbey .

Gottfried Bäuerle was the architect of the colony houses and combined various unusual architectural elements such as a covered entrance, decorative balconies and round windows in his own house in Lloyd George Street.

In the vicinity of the Templar Colony, the Borromean Sisters' convent built a branch in 1894, which was later expanded to include a hospice (Lloyd George Street 12), a school and a home for the elderly. In 1912 a spacious garden was bought; since 1934 pilgrims have been accepted. The charitable activity is financed with the income from the pilgrimage.

As in the neighboring districts of Baq'a , Katamon and Greek Colony , an exchange of people took place in the German Colony after the establishment of the State of Israel. Lower-class Jewish immigrants moved in where wealthy Arabs, Germans and Greeks had lived up until then. Generously proportioned apartments were divided into several small residential units for these poor tenants. Then gentrification began in the 1970s : Middle-class Israelis bought several small apartments, restored the original layout of the apartment and restored the garden. Real estate was built on existing open spaces. Members of the middle class also moved in here. In view of the Jewish population of Jerusalem, which has a large proportion of ultra-Orthodox in the city center, many of whom belong to the lower class, it was important that secular and wealthy Jews found a residential area close to the city center that suited their lifestyle in the German Colony. Around 25% of the apartments around Emeķ Refa'im Street now belong to foreigners, especially Americans, who often only live there for a few weeks a year.

Memorial plaque for the victims of the Café Hillel attack

A bomb attack was carried out on September 9, 2003, on the Café Hillel branch on Emeķ Refa'im Street. The Palestinian suicide bomber killed seven Israeli civilians, including the cafe guard. Numerous other people were injured. The military wing of Hamas ( Iz a Din a-Qassam Brigades) took responsibility for this.

The destroyed building was immediately rebuilt as it had looked before the attack, but with inconspicuous changes to the entrance area in order to ensure greater safety for the café visitors.

The building on King George Street, built by an Armenian businessman in 1862 as a spacious private house, has been used as a natural history museum since 1949. It has a park-like garden with Mediterranean plants. The collection includes numerous animal specimens, including the last leopard of the Judean desert. In the absence of a modernization concept, the future of the museum in 2017 was uncertain.