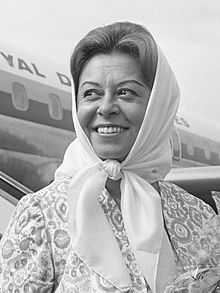 The daughter of a teacher studied art history, archeology and philosophy in Rome and was awarded a Dr. phil. PhD. During her studies, she performed with a student theater group and got to know the author and director Federico Fellini . The two married in 1943. Their only child, who was born in March 1945, died a month later.

After her marriage, Masina shifted her creative field entirely to acting, first on the stage, then increasingly also in film. She knew how to embody tragic characters as well as clownish naive ones.

She celebrated her greatest successes as an actress with roles in her husband's films, such as Gelsomina in La Strada - The Song of the Street , in The Nights of Cabiria , Julia and the Ghosts or alongside Marcello Mastroianni as an aging dancer based on the model of Ginger Rogers in Ginger and Fred . For her performances she has won several awards, such as the David di Donatello or the Best Actor Award from Cannes . She was seen in an unusual role in a Czechoslovakian-German fairy tale film in 1985, in which she played Frau Holle . When roles that met her requirements did not materialize, she mainly worked as a writer for television programs.

After Fellini's death, which she found out about from the car radio on the way back from a visit to him at the hospital, her cancer worsened, and she succumbed to it just under five months later. Her final resting place is on the Cimitero di Rimini next to Federico Fellini and her son Pierfederico.