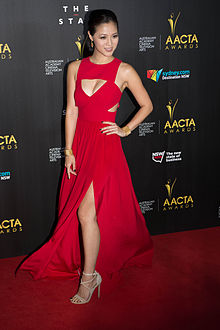 Huang was best known for her role as Gemini Female in the martial arts film The Man with the Iron Fists, shot by RZA . She also played Mei Chen in the pilot for the CBS series Intelligence in 2013 . She also plays May in the Hong Kong action film Cold War alongside Aaron Kwok , Andy Lau and Tony Leung Ka-Fai . Huang also appears in the Hong Kong romantic comedy Love in Space (2011) and the action film Overheard , by starring alongside Daniel Wu and Michael Wong who embodies Jenny.

She won the HollyShorts Film Festival's Best Actress award for her role as Ava Chen in the short film Bloodtraffick by Jennifer Thym. Huang had already worked with Thym on other occasions, for example on the Hong Kong film Jasmine .

In the romantic drama Lost for Words , she plays an affair with Sean Faris . In the 2015 science fiction horror thriller Infini , she embodied the on-board physician Claire Grenich, among others, Luke Hemsworth and Luke Ford . In 2016 she starred in Independence Day: Return of Lin Tang. Huang starred in the television drama Friends , which won the Taiwanese Golden Bell Award. Huang has also featured on the covers of magazines such as Vogue , Harper's Bazaar , FHM , Elle and Marie Claire several times .