The saga of Grettir the Strong ( Icelandic Grettis saga ) is one of the most important Icelandic sagas and was written in Iceland in the 14th century . The author remains anonymous as in the other Icelandic sagas. 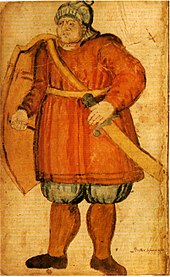 Grettir in contemporary costume and armament. Illustration in a 17th century Icelandic manuscript.

It's about a very strong man from a good family from Bjarg farm on Miðfjörður in northern Iceland. Even as a child, Grettir proves to be a real Viking , but he can also write poetry, and in this is similar to his saga colleague Egill Skallagrímsson . He's also taller and stronger than other kids his age. Even at the age of 10 he does not want to carry out the tasks assigned by his father, kills the geese instead of tending them and pulls half the skin off the weather-sensitive horse. The father therefore regards him as useless and prefers his older brother Atli to him, whereas his mother supports him very much. His quick-tempered temper gets him into some trouble.

As a 16-year-old he killed a man and for the first time (for 3 years) to outlaw declares then he makes his first trip to Norway .

On his return to Iceland, he messed with the revenant Glámur, who unsettled the farmers in Vatnsdal in northern Iceland. He defeated the revenant and earned the gratitude of the peasants in the area. Since that fight, however, he has been afraid of the dark.

Finally, as a young man, he travels to Norway again, where King Olaf Haraldsson gathers capable young men around him. A misfortune happens. When Grettir swims across a fjord to get a fire, the two sons of a powerful man from Iceland, whom he meets, are so clumsy that their house burns down and they perish in it. Grettir is accused of murder by the father and the latter also achieves his sentence of 20 years' exile in the Icelandic wastelands at the Althing Supreme Court .

A long period of wandering across the country follows. Friends and relatives want to rehabilitate Grettir, but the enemy is more powerful and, in the 19th year of lawlessness, manages to persist and Grettir to continue to be considered outlawed .

Grettir leads a robber life among others in the Westfjords , in the Arnarvatnsheiði and in northern Iceland. He also visits a relative in Gilsbakki with the Hraunfossar several times to spend the winter there.

An example of its strength is provided by wintering in Reykhólar , in the Westfjords. He and two other strong men fetch an ox from an island in Breiðafjörður . The weather is stormy, the ox completely exhausted on arrival. Then Grettir takes him on his shoulders and carries him to the courtyard.

Finally, in the 19th year of exile, Grettir and his younger brother Illugi withdraw to the island of Drangey in Skagafjörður . From there he also swims the 6 km to the mainland to get a fire (today imitated annually by numerous people). An enemy sent by the father of the dead brothers tries several times to kill him. Finally, his foster mother intervenes with a magic trick and sends him an enchanted tree trunk across the water. The stupid servant brings it to the refuge as supposed firewood. Grettir promptly drives the ax into his leg as he tries to chop the trunk. The leg begins to fester and weakens Grettir considerably. In this state he is eventually killed by the enemies.

The story has an aftermath, after all, Grettir's surviving brother, Þorsteinn, is obliged to take revenge. He follows the murderer first to Norway , then to Constantinople , where he kills the murderer and gets involved in love affairs with a married lady, which is described in great detail. This is finally divorced, they get married and after many years absolution from the Pope takes place on a pilgrimage to Rome .

The aftermath has long been seen as a flaw in the saga. It differs significantly from the usual saga schemes in terms of style and subject matter. Þorstein's relationship to the woman is described in great detail and with the inclusion of burlesque elements (for example, as in the early Middle High German day songs ). The influence of the European courtly novel and the knight reps can also be seen here. Perhaps the aftermath was not included in the oral tradition and the very well-read author simply added it because it processed the literature of the time.

Bjarg, Grettir's birthplace, is still cultivated today. The area has been divided into two courtyards, Ytra-Bjarg and Bjarg. According to legend, the severed head of Grettir was given to his mother Ásdís and is said to be lying under a large rock in front of the courtyard. A memorial stone ( Ásdísarsteinn ) was erected for the mother on the road to the courtyard , the panels of which depict scenes from the saga.

Internet editions of the text