Gustav Adolf Kuhfahl (born February 9, 1870 in Leipzig , † June 6, 1938 in Wiesbaden ) was a German lawyer and photographer who volunteered to preserve the post mile columns and stone crosses in Saxony . 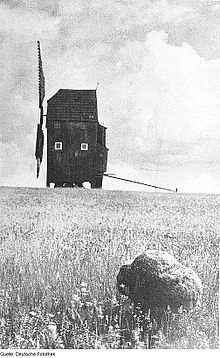 He was the son of a cooper based in Leipzig. After attending school, he studied law at the University of Leipzig . He continued his studies in Freiburg im Breisgau . He received his doctorate as Dr. jur. and initially worked as a trainee lawyer and assessor at various authorities in the Kingdom of Saxony . After Kuhfahl worked for some time as a council assessor in Dresden , he was appointed director of the Güntz Foundation in Dresden in 1906, which was established by the publisher of the Dresdner Anzeiger , Justus Friedrich Güntz .

As an enthusiastic mountaineer, he not only traveled the Elbe Sandstone Mountains, but also the Alps. There he made numerous photographs as an amateur photographer, which he took in 1907 under the title Hochgebirgs- und Winterphotographie. Practical advice on equipment and working methods and published in 1910 as a book with the camera in the mountains together with information on photography in the high mountains.

He achieved lasting importance in particular through the photo documentation of all the Saxon post-mile pillars and stone and expiation crosses that existed in the early 1930s, on which he published two monographs that are still noteworthy today at the Saxon Heritage Protection Association.

Kuhfahl had a summer apartment in Zinnwald-Georgenfeld and died in June 1938 during a cure in Wiesbaden.

Gustav Adolf Kuhfahl's estate is kept in the Saxon State Library - Dresden State and University Library, the photographic part is in the Deutsche Fotothek .