Hans Busch (born February 27, 1884 in Jüchen ; † February 16, 1973 in Darmstadt ) was a German physicist . He was the founder of electron optics and thus laid the theoretical foundations for the electron microscope .

Hans Walter Hugo Busch was born in 1884 as the son of the owner of a cotton spinning and weaving mill Dr. phil. Hugo Busch and his wife Johanna Roth were born in Jüchen in the Rhineland. After graduating from high school, he studied physics in 1904/05, first in Strasbourg and from 1905/06 in Berlin and from 1907 at the University of Göttingen . In Göttingen, where he was employed as a research assistant at the Institute for Applied Electronics from 1907 to 1913, he received his doctorate in 1911 on stability, instability and oscillations in electrical engineering .

During the First World War he was an artillery officer at the front from 1914 to 1916 and a scientific assistant at the "Radiotechnical Research Institute for Navy and Army" in Göttingen from 1913 to 1920. He completed his habilitation in 1920 at the University of Göttingen with a thesis on the heating of wires in dilute gases by electric current . First he became a private lecturer at the University of Göttingen.

From 1920 to 1927 he was an assistant at the Physics Institute at the University of Jena. In 1922 Busch became an associate professor at the University of Jena , where he developed electron optics and the electron lens . This work made it possible to calculate the movement of electrons in magnetic fields, the focusing function of coils on moving electrons and their imaging function. These results formed the theoretical basis for the development of the electron microscope. In 1925/26 Busch belonged to the German National People's Party .

In 1927 he became technical director of the AEG telecommunications cable works Oberspree in Berlin. In 1930 Busch moved to the TH Darmstadt as a professor of electrical engineering . Busch succeeded Professor Karl Wirtz (1861–1928) , who died surprisingly in 1928 . The chairman of the appointment committee was AEG board member Waldemar Petersen , who had been on leave from TH Darmstadt since 1926. The appeal process dragged on because Abraham Esau was initially planned as his successor. After his rejection at the beginning of 1929, a new list was drawn up with Hans Busch as the winner. In view of Busch's structural and financial demands, he had u. a. demanded a new building for his institute for telecommunications technology , and against the background of the difficult economic situation in the people's state of Hesse, the proceedings seemed to be in danger for a long time. It was only with the help of Waldemar Petersen and the industry that Busch was finally brought to the TH Darmstadt. 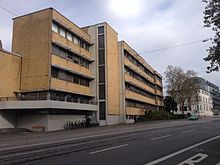 Hans Busch built the new institute for telecommunications technology here , although the required new building could only be opened in 1934. In Darmstadt he also wrote his fundamental book on electron optics.

Hans Busch was rector of the TH Darmstadt in 1933/34 and dean of the faculty for electrical engineering in 1937–39 and 1944–47 . Busch was a supporting member of the SS from 1933 to 1939 . Like numerous other Darmstadt professors, he was involved in research and development work for the “Peenemünde project”. Since 1940, he has carried out research in the field of data transmission for the Peenemünde Army Research Center with several employees of the institute . These were important military tasks. Because of his special achievements, he was awarded the War Merit Cross, Second Class, in 1942.

On July 1, 1946, he was dismissed from civil service for “political reasons”. In the denazification process, he was initially classified as a fellow traveler in mid-1946 and sentenced to a monetary atonement of 1,000 Reichsmarks. In September 1947, however, the proceedings were finally dropped.

In 1949 he was made an honorary member of the German Society for Electron Microscopy and honored with the title "Father of Electron Optics". In 1952, Busch retired.

A building (S3 / 06) of the electrical engineering department at the TU Darmstadt erected by Ernst Neufert and Wolfgang Rösel between 1969 and 1973 was named after his name in his honor while he was still alive.